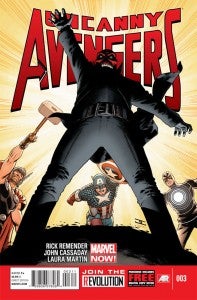 When Uncanny Avengers #2 was delayed by two weeks, the big question on everybody's mind was whether the problem was a one-time event, or whether it would be a continuing thing. It looks like Marvel Comics has the answer.

Uncanny Avengers #3, originally scheduled to ship in December, has been delayed until January 16. With the second issue of Marvel NOW!'s flagship title delayed until November 28, that means that so far the book is shipping roughly every six weeks and that no issue will ship during the month of December (although it's likely that #2 will sell out and go back for a second printing that could fill the hole in Marvel's schedule).

Marvel Comics and DC Comics have long had a philosophical disagreement on matters like this; while Marvel feels continuity of creative team is important for the collected edition, and so are somewhat more willing to tolerate such delays (particularly from high-profile creators like Uncanny Avengers's John Cassaday), DC is more deadline-oriented and willing to use fill-in creators, especially on art.

Neither solution particularly satisfies many fans, of course, although books this high-profile are rarely punished by that fan discontent in sales.