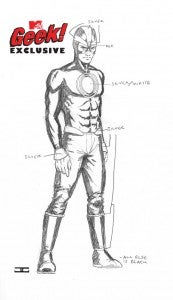 John Cassaday, artist on the upcoming Marvel NOW! title Uncanny Avengers with writer Rick Remender, has released a number of sketches for the characters' redesigned characters to MTV Geek. This time out, we get a look at the mutants--so don't be surprised if tomorrow there's another installment that examines the redesign of some of the human characters we'll see in the title.

"Rick and I had some specific directions we wanted to push things with a couple of the characters, but in general it was John’s design sense which carried the day," Marvel Senior Vice President of Publishing Tom Brevoort told the site.

For Havok, Brevoort described the reinvention as "moving back towards the way Neal Adams originally depicted his powers working visually back in the day, only maybe modernized a little bit," telling MTV, "So yeah, no glowy Tron lines necessarily, but a while lot of concentric circles."

Like all of the redesigned characters we've seen close-up so far, the approach seems to be somewhat more real-world and functional than just the traditional superhero spandex, but not quite taking it to the extreme of a Dark Knight-style armor suit or even an X-Men movie-style thing where they've got uniforms and leather (although the idea of team costumes is apparently still not completely off the table). 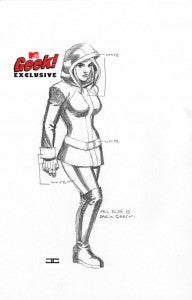 Of the (slightly) redesigned Rogue, the editor told MTV Geek, "I think everybody involved really liked her original Michael Golden outfit, the one with the hood—so this represents a modernization of that approach to the character. As you say, it’s really not all that different from the kinds of things she’s been wearing recently. A little bit less scarf, maybe."

Probably the most dramatic redesign on the page is that of Scarlet Witch, whose bikini-and-cape ensemble is replaced with a dress-looking trenchcoat/cape element that's evocative of a lot of comics' other supernatural characters. 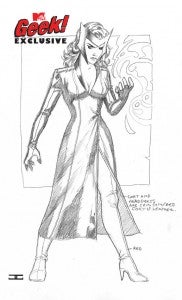 "The Scarlet Witch has always had one of the least practical costumes for a super hero," said Brevoort, "so having come out the other side of AvX and Children's Crusade, that was something we were looking to address. I didn’t really have anything specific in mind other than, 'More practical' and 'Keep the tiara...' That Tiara is the most easily identifiable aspect of any Scarlet Witch outfit. It was John who came back with the more covered-up civilian style, which we liked and made sense. Wanda is in a different place right now, she doesn’t feel like a super hero any more and she’s looking for a way to atone for her past actions and to move forward as a person, so this look underlines that change in her outlook."

Uncanny Avengers #1 will hit the stands in October.