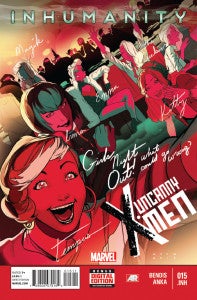 Uncanny X-Men #15.INH showcases the world of the X-Men getting its first brush with the Marvel Universe's post-Infinity, Inhumanity-centric status quo. It achieves its apparent goal, to acknowledge that the Marvel universe has changed, but the issue can be almost entirely summed up with Emma Frost's closing line: “I think our world just got a lot more complicated.”

Brian Michael Bendis writes the issue, with guest artist Kris Anka illustrating. The issue looks great, with Anka's thin lines and simplified character designs fitting the lighter tone of the issue nicely. The light colors could pop a little more, but they're attractive as it is. It can be hard to tell some of the characters apart at times, but that's not really Anka's fault, since its been a problem with the series from the first issue and is probably unavoidable with four attractive, blonde female characters present on the team's roster.

The story is quite a change in tone from the bombastic dramatics of Battle of the Atom. The young women of the new Xavier School approach Magik because they have an urge to go shopping, and so, with Kitty Pryde and Emma Frost along for the ride, they do.

That's about it for the issue. Everything is well crafted: Anka's art, as mentioned, looks wonderful and Bendis is on top of his game when it comes to the dialog. The young girls are all suitably excited to be getting out of the institute for a change, Magik and Emma are, as usualy, quite intimidating, and Jean Grey and the Cuckoos continue to butt heads. Its all pitch perfect and a pleasant diversion, but its nothing more than that.

Its during this shopping excursion that the events at the end of Infinity occur. The Terrigen Bomb is set off and the Terrigen Mists spread throughout the world. In London, Emma, Magik and company encounter a new Inhuman as he emerges from his cocoon. The exchange is interesting and does a great job of laying out the strange relationship that mutantkind is likely to have with the Inhumans going forward. This particular Inhuman, a Latverian student on a class trip, has been transformed and given powers, much the same way a mutant would at his age. But he's not a mutant. In fact, he has an aggressive distaste for mutants that goes unchanged even after his own strange transformation.

The X-Men aren't sure what to do with the young Inhuman. Should they take him back to their mutant school or not? The question is made irrelevant when the Inhuman knocks out the entire group of X-Men without even meaning too and leaves them there to take the blame for the disturbance when the authorities arrive.

Clearly the X-Men have a lot to workout in regards to the suddenly booming population of Inhumans in the Marvel Universe, but it remains to be seen how far the X-Men books will actually explore that avenue. The issue ends rather suddenly without a hint as to whether or not this story will be followed up in future issues. As it stands right now, the issue just feels like a way of making sure that X-Men fans who may have otherwise skipped Infinity are aware that the Inhumans are a going concern.

That's not really enough to justify the issue on its own though. It's well crafted, but light on purpose. Fans of these character will enjoy getting to see them decompress and behave like “normal people,” especially after all of the time travel shenanigans they've been dealing with lately, but there's not even much real character development to speak of. It remains to be seen whether or not the saga of Inhumanity will further entangle itself with the X-Men's struggles, but as it stands – apart from Anka's art being absolutely worth looking at – this issue feels pretty skippable.