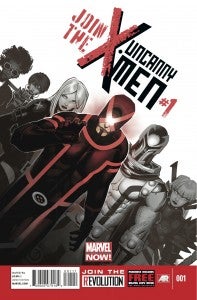 One of the longest-running titles at Marvel Comics, a book that's been more immune to relaunch and cancellation than almost any other Marvel title and one that fans were disappointed to see go in the wake of the Marvel NOW! relaunch was Uncanny X-Men. Today, Marvel confirmed rumors that the comic would return with a new #1 issue in February, from writer Brian Michael Bendis (who also writes All-New X-Men and Guardians of the Galaxy for the publisher) and artist Chris Bachalo.

“What Brian and Chris have planned for Cyclops’ team in the post-'Avengers VS. X-Men' landscape is nothing short of its adjective, 'uncanny'," said Axel Alonso, Editor In Chief, Marvel Entertainment.  "Mutantkind has been going through a reEvolution over the past couple years. The pressing question now is, who will lead them into the future?"

Of course, it's not the same book it's been in the past. With no Charles Xavier, Cyclops would have seemed for years like the logical heir to the Uncanny X-Men leadership role...but it's a whole new ballgame since Cyclops was responsible for Xavier's death and has been spending the last little bit of time since the end of Avengers vs. X-Men in prison. His Extinction Team was scattered by the end of that event, but now he's got the band back together and he, along with Magneto, Magik and Emma Frost, are recruiting mutants to join his efforts to redefine the X-Men and redeem himself.

Uncanny X-Men Will Relaunch in February