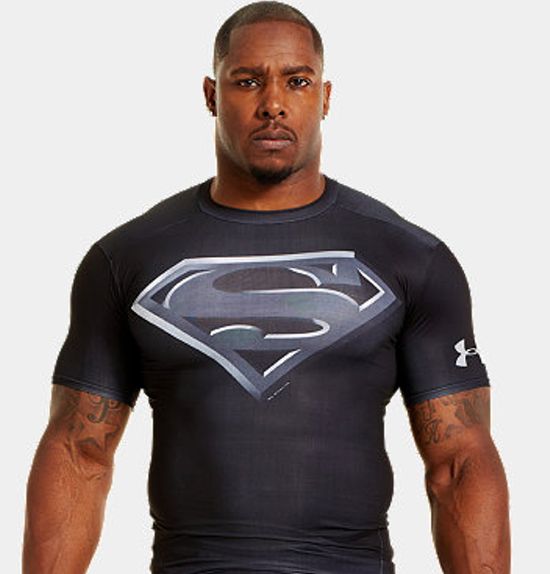 Back in July of 2013, Under Armour announced a new deal with Warner Bros. Consumer Products and DC Entertainment to create a line of athletic performance apparel inspired by popular DC Comics Super Heroes like Superman, Batman, Wonder Woman and more. Under Amour named their line of super-hero inspired apparel the Under Armour Alter Ego collection. Every year, Under Armour sponsors the High School All-America Game, which is a high school football all-star game spotlighting the nation's top high school seniors. As the players have been participating in skills challenges and getting ready for the game, they have been wearing various apparel from the Under Armour Alter Ego collection. Check out some of the images below from the official All-America Game Twitter account, which feature some of the nation's top high school athletes decked out in the Alter Ego collection, such as Leonard Fournette sporting the Superman logo. Fournette is the top-ranked high school running back, and he will announce his college decision today during the All-America Game. "Superhuman feats are accomplished by athletes every day. Whether it's achieving a personal goal or competing on the field, we wanted to enable athletes to feel like a Super Hero and show off their alter ego," said Glenn Silbert, Vice President, Men's Youth, and Accessories, Under Armour when announcing the line. The Under Armour High School All-America Game kicks off on Thursday, January 2, 2014 at 4 PM ET on ESPN.

Ermon Lane (#UF) looked good at practice all wk. How will he do vs. #TeamHighlight's stacked secondary? #UAALLAMERICA pic.twitter.com/auHPf1OC5A — All-America Game (@AllAmericaGame) January 2, 2014

Netflix: Every Movie and TV Show Arriving in October 2021