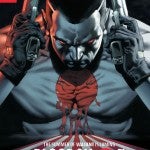 While fans have long known that Surrogates creator Robert Venditti and artist Cary Nord would be taking over the reins of X-O Manowar when Valiant Comics relaunches in May, the company's other three titles have been substantially more shrouded in mystery. Throughout the week, the publisher has been releasing a series of "The Summer of Valiant" images which have revealed frustratingly little for fans, except that Harbinger would be from the minds of Joshua Dysart and Khari Evans. A series of images was revealed throughout the week, culminating with yesterday's surprising announcement that Archer and Armstrong would be one of the relaunched titles, coming in August. This morning, though, USA Today has run a story that finally sheds some light on what's going on. Along with covers 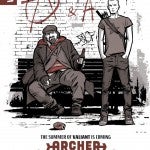 for each of the titles and the same preview pages found in our Robert Venditti interview linked above. the newspaper has revealed the remainnig creative teams, a mix of familiar names and beloved characters from years past. Bloodshot comes with crime and espionage built right into its DNA, with current Birds of Prey scribe and novelist Duane Swierczynski writing and art by Arturo Lozziand Manuel Garcia. Archer and Armstrong meanwhile, still exciting fans by the very fact that it will exist, will be tackled by Fred Van Lente and Clayton Henry. After a long run on Incredible Hercules, this is the second or third very different project for Van Lente, who has traditionally worked in monthly superhero comics but has recently written Hulk: Season One for Marvel and Comic Book Comics for IDW. In addition to their line-wide relaunch, dubbed "The Summer of Valiant," it was also recently announced that the publisher had sold the rights to Sony for a Bloodshot feature film.