Printed on five copies of Unity #1, which was released in stores last week, Valiant Entertainment have packed five "Golden Tickets" which will entitle the bearer to a free trip to New York Comic Con and a Valiant prize package.

On the cover of ten randomly-distributed pullbox variants of Unity, Valiant included the #GoldenTicket hashtag near the barcode. If you've got one, you win.

Five other winners will be randomly selected, apparently. For an alternate method of entry, send a standard-size postcard (one per household) with your name, address, email address, and day and evening telephone numbers to: Unity #1 Golden Ticket Promotion, 424 W. 33rd St, Suite 420, New York, New York 10001. Winners will be drawn at random on February 10th, 2014. 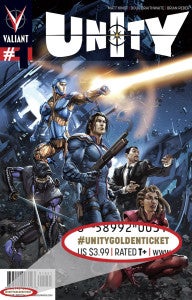 Courtesy of ReedPOP, the ten lucky Unity #1 Golden Ticket winners will each receive one four-day pass to New York Comic Con 2014 plus a one-of-a-kind Valiant prize package, complete with a tour of Valiant's New York City offices, dinner with Valiant editorial staff, and a comprehensive collection of Valiant trade paperbacks and hardcovers.

"The success of Valiant's return has been a grassroots effort since day one, and, with Unity #1 now on shelves as Valiant's biggest debut of the year, we wanted to give a few lucky fans the chance to share in our success," said Valiant Publisher Fred Pierce. "Head back to your local comic shop today to ask about Unity #1, and you might just find yourself with a  once-in-a-lifetime opportunity to join us next year on the floor at New York Comic Con."

Unity #1 has garnered almost universally positive reviews and sold out of its 70,000-copy print run, making it the best-selling title of the year from a non-Premiere publisher, Valiant reported yesterday.