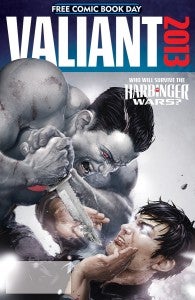 Valiant Entertainment announced today that they'll have two books available for readers to enjoy on Free Comic Book Day -- one of which ties into their upcoming crossover event Harbinger Wars, pitting Bloodshot against Harbinger, and one that looks back at Valiant's past, featuring stories by '90s creators who worked for Valiant in previous iterations. More and more, major publishers are releasing more than one top-tier title for Free Comic Book Day, with both DC and Marvel having "mystery" titles offered this year, presumably tying into as-yet-unannounced titles or events. The event, which takes place on May 4, sees direct market comic book retailers handing out free books to the public in an effort to draw attention to the industry and the art form of comics. You can check out Valiant's press release below for specific details on their FCBD handouts.

Valiant's greatest heroes of past and present will be turning out in force on Saturday, May 4th for Free Comic Book Day 2013! Valiant is proud to announce not one, but TWO special releases for next year's Free Comic Book Day, featuring some of comics' brightest talents and two generations of fan favorite superheroes. 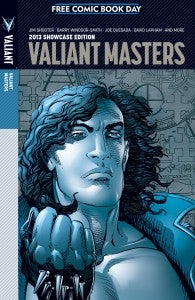 First up, the critically acclaimed, best-selling comics launch of the decade throws it into high gear with the VALIANT 2013: HARBINGER WARS FCBD SPECIAL! Test your mettle with an exclusive look inside HARBINGER WARS – the blistering conflict between BLOODSHOT and HARBINGER that will crack the Valiant Universe in half. Plus – who will stand to oppose X-O MANOWAR on PLANET DEATH? What adventure lies beyond the horizon for ARCHER & ARMSTRONG? Who is the true heir to the legacy of the SHADOWMAN? And what top-secret projects could possibly be coming next? Featuring the art of Patrick Zircher, Cary Nord, Trevor Hairsine, Clayton Crain, Marko Djurdjevic and more, everything you need to know about the Valiant Universe in 2013 happens right here this Free Comic Book Day!Then, dive deep into the greatest stories of the original Valiant Universe – remastered and collected together for the first time anywhere – with the VALIANT MASTERS: 2013 SHOWCASE EDITION! Relive the best-selling adventures of Valiant's definitive heroes – NINJAK, SHADOWMAN, ETERNAL WARRIOR and more – in this special FCBD release previewing the next year's worth of Valiant Masters hardcover collections. Featuring all-time classic work by some of comics' most celebrated creators, including Jim Shooter, Joe Quesada, Barry Windsor-Smith, David Lapham, Bob Layton and more, this is the perfect opportunity to discover how the Valiant Universe created a new generation of comics fans and became the stuff of legend.The best of the Valiant Universe, yesterday and tomorrow – coming this Free Comic Book Day to a retailer near you!For more information, visit FreeComicBookDay.com and ValiantUniverse.com.