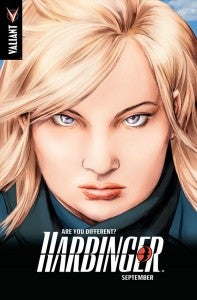 Zephyr, a major player in Valiant's Harbinger series the first time around, will return in the series' fourth issue in September, according to a press release made by the publisher today. Featuring the cover of the fourth issue with art by Patrick Zircher, Faith "Zephyr" Herbert appears with the caption "Are you different?"

Valiant's Harbinger #4 to Feature the Return of Zephyr