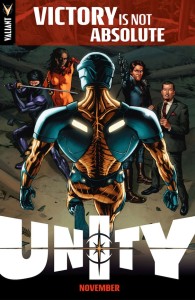 X-O Manowar doesn't have too many friends in a pair of new teaser images for Unity, Valiant's big story beginning in November.

Ninjak, Eternal Warrior and more will apparently square off against Valiant's flagship character in the story, which reuses the title--but apparently not the high concept--from the company's first crossover n the '90s. The "Road to Unity" kicked off this month with X-O Manowar #15, in which the armored, time-traveling Visigoth met up with the Eternal Warrior for the first time.

"I will say that events that are happening in X-O starting with issue 15, are crucially important not just to the future of X-O but to the future of the whole Valiant Universe," X-O Manowar writer Robert Venditti told ComicBook.com. "And again, that’s not hyperbole; that’s actually true."

And while so far these teasers make it look very X-O Manowar-centric, Habinger writer Joshua Dysart assured us in an interview published this morning, "I think there will be very little that won’t be touched by Unity in the Valiant Universe."

Even the comedy-tinged Quantum & Woody isn't immune from the effects of Unity; series writer James Asmus told ComicBook.com at San Diego Comic Con International that he'll have to deal with fallout from the story as well.

The degree to which the events of Eternal Warrior #1, which debuts not long before Unity from the creative team of Greg Pak and Trevor Hairsine, will play a role in the story isn't clear.

You know what might be really fun? Seeing whether the fan-fiction community will try to take on Unity...