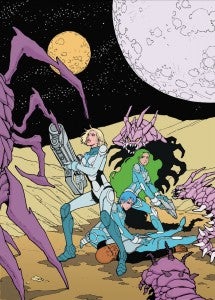 David Michelinie, the co-creator of fan-favorite Spider-Man villain Venom and one of the most popular Iron Man writers of all time, has taken to the popular crowdfunding site Kickstarter to support his new Mansion Comics venture Bigger Bang Galaxy. The series, which features art by Weilin Yang, will be delivered in January 2013. What's the series about? Here's the official description from the project's Kickstarter page.

Most scientists agree that between 10 and 15 billion years ago, the Big Bang--an as-yet unexplained cosmic detonation--created the universe. But what if that shattering blast instead created not one, but four separate universes, dimensional equals that grew and developed through similar, though subtly different, evolution? And what if the spiraling paths of those universes were destined to one day converge...and collide! This is the background for the gripping new sci-fi saga, BIGGER BANG GALAXY. As courageous men and women from each universe set out on a determined quest to find the only substance that could possibly deflect catastrophe on an unimaginable scale, the very source of the Big Bang itself: Neomatter. But even if they find it, can they control it? Or will their fight for survival bring about the very destruction they seek to avoid? Against this overall arc of hope and desperation, veteran writer David Michelinie (IRON MAN, VENOM) and exciting anime-stylist Weilin Yang (THE SATURNIST) tell character-driven tales of adventure and discovery, laced with humor, tough decisions, and plot twists you will not see coming! What would you do, if you could save your own world but in the process destroy countless others? Choose cooperation or competition, self-serving or sacrifice, wield the olive branch or the sword? This first two-parter introduces major characters and conflicts, and is the perfect jumping-on point for an epic journey into the unexplored. Be in on the beginning of something special, something singular, something...bigger!

Michelinie was a staple of the '80s and '90s comic book scene, writing just about every major character at one point or another, but arguably his most famous creation is Venom, the Spider-Man villain he co-created with Todd McFarlane, who has been at the center of a cosplay controversy this week. Among the Kickstarter backer rewards for Bigger Bang Galaxy is an exclusive comic that features a 12-page solo adventure for one of the book's characters and a cosplay gallery of a model showing off the character's look.