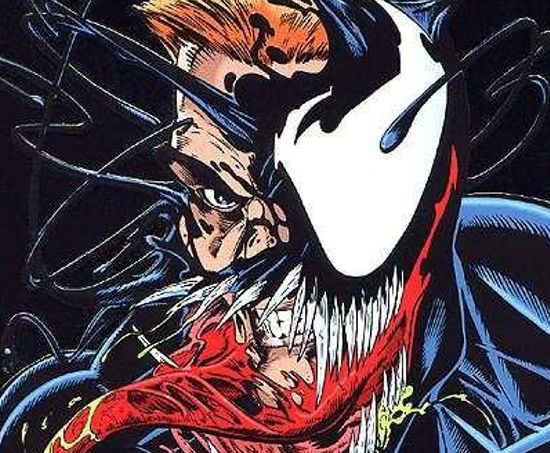 A news article on The Daily Bugle called "Spider-Man Vs. The Mob" is written by none other than Eddie Brock, who became Venom in the comic books. Here's the article, which also mentions The Enforcers.

Spider-Man Vs. The Mob by Eddie Brock

What began as a mob shoot-out escalated into a full-blown superhuman slugfest when the vigilante known as Spider-Man appeared on the scene. An argument inside the Zero One Lounge turned ugly when reputed mob enforcer, “Fancy” Dan Brito, pulled a gun on rivals from the Manfredi crime family. As club-goers fled onto the streets of the Meatpacking District, Spider-Man dropped down out of the sky.

Not content to merely take the law into his own hands, bystanders claimed that Spider-Man mocked the thugs as he delivered a one-two punch that sent them soaring.

“It was hard to see from where I was hiding,” said witness Andrea Moore of Park Slope, “but I heard someone, I’m pretty sure it was Spider-Man, say, ‘I hope you’re not afraid of heights,’ and then one of those guys screamed as he landed on top of a fire escape.”

When pressed about any crimes she may have witnessed Spider-Man committing, Moore replied, “Crimes? It’s not a crime to round up stray dogs. What the hell are you talking about?”

Spider-Man disappeared as police arrived to find a dozen mobsters restrained with unmistakable webbing. Brito and his accomplices, Jackson “Montana” Brice and Raymond “The Ox” Bloch, spent the night in the 10TH Precinct holding cell. The NYPD has yet to announce what charges, if any, they plan to bring against the smack-talking vigilante.

Brito, led away in handcuffs, was overheard describing the encounter with the web-slinger:  “Just when I thought I was out, he pulled me back in.”