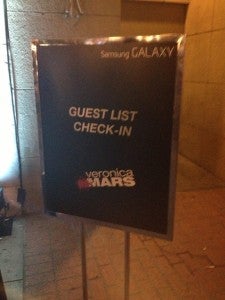 Warner Bros.'s "post-modern Nancy Drew" was cancelled more than five years ago, but after years of being berated by fans for more, showrunner Rob Thomas took to Kickstarter and generated more than $5 million from fans. Now, most of the old gang has come back together, along with at least a brief appearance from Jamie Lee Curtis.

Ahead of the mini-trailer, though, is a couple of minutes of conversations with the cast and crew, in which they discuss the show's history, the Kickstarter campaign and their love for the fans.

"Fans are cool, but Veronica Mars fans are awesome--that's just how it works," series star Kristen Bell says in the video, talking about the more than 91,000 backers who made the movie a reality.

Check out the trailer below; Veronica Mars will be in theaters and on video in February and March 2014.