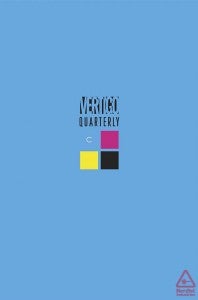 DC Entertainment's Vertigo imprint today announced a new, quarterly, year-long anthology series titled Vertigo Quarterly: CMYK, set to bring a number of top talents--including some, like Joe Keatinge and Fabio Moon, who have rarely worked with Big Two publishers before--to Vertigo to tell a series of short stories "inspired by the printing process." Comics have been called "Four-Color Funnies" in the past, because from the 1940s until the 1970s, the C-M-Y-K (cyan, magenta, yellow, black) printing process formed the basis for comic coloring and indeed the kind of inexpensive coloring use in most newspapers and other "disposable" media even beyond when it was no longer cutting-edge technology. Some comics artists, notably Mike Allred, currently working on FF and Silver Surfer for Marvel Comics but best known for his creator-owned work like Madman and Vertigo's I Zombie with Chris Roberson, have regularly utilized the look of these old comics to create a kind of nostalgic, traditional feel for newer books. Here's the official description from DC/Vertigo, via Nerdist: The four colors that are the basis of comic coloring—CYAN, MAGENTA, YELLOW, BLACK—serve as the inspiration for talent to push the boundaries of short storytelling in the VERTIGO QUARTERLY: CMYK anthology series. Starting with stunningly simple, bold covers, CMYK will defy all conventions of traditional comic book anthologies. The unifying color may suggest a mood, a plot point, a coloring technique—limited only by the imagination of the incredible talent involved. Starting with CYAN this Spring with stories and art by Jock, Fabio Moon, James Tynion IV, Martin Morazzo, Robert Rodi and Javier Fernandez, Amy Chu, Joe Keatinge, Cris Peter, Shaun Simon and Tony Akins and more! Followed by MAGENTA in summer, YELLOW in fall and BLACK in winter, you'll see color throughout the year as only Vertigo can deliver.