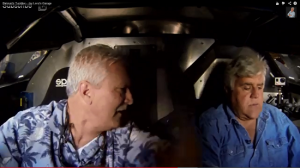 Just uploaded to Leno's YouTube account, the latest installment of Jay Leno's Garage sees the late night host strap into the most recent iteration of The Batmobile, taking a ride in "the Tumbler," the souped-up all-terrain supercar that appeared in Christopher Nolan's Dark Knight Trilogy.

In the video embedded below, Warner Bros. Transportation Coordinator Hobart Lundt takes Jay for a super-fun ride in the custom-built Tumbler from Chris Nolan's Batman trilogy.

The Tumbler has been one of the key elements of the Dark Knight Trilogy in many ways; it's been making the rounds at comic book conventions and other celebrations of Batman lore since the end of filming on the series. It also, according to features on The Dark Knight Trilogy Ultimate Collector's Edition (out last week), was one of the only things that Warner Bros. specifically asked for from Nolan, whose vision was mainly his own.

They wanted a Batmobile, Nolan revealed in The Fire Rises, a documentary on the making and legacy of the Dark Knight films included in the box set. At first he and screenwriter David S. Goyer couldn't quite crack how a flamboyant vehicle would gel with the Nolanized version of Batman, but rather than being discouraged, it quickly became a storytelling challenge--and shortly thereafter, The Tumbler was born.

Unlike many stunt and prop cars, which Leno notes are nowadays often done with CG or are models meant for green screen action, The Tumbler is fully drivable, and the car-obsessed late night personality did just that--although he first had to sit down and get a bearing for the controls, which aren't quite as standard issue as the Adam West or Michael Keaton Batmobiles.