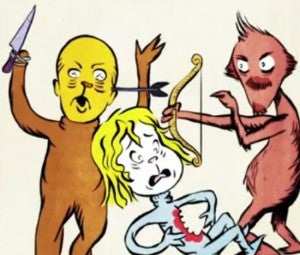 Have you ever imagined The Walking Dead as a Dr. Seuss story? No, we hadn't either, but fortunately the team at CineFix did. In The Seussing Dead, the story of Season 3 of The Walking Dead is retold as if it were a Dr. Seuess story.

Here's how the story starts: "On streets and in hollows, in building and house, the Walkers were walking, shoving guts in their snouts! The RickTickle said, 'See this place that I've found? A correctional facility, where supplies abound!'"

The rest of the video recreates classic scenes from Season 3 of The Walking Dead, including the scene where Daryl Dixon has to kill zombie Merle. And just in case you were wondering, Daryl's Dr. Seuss name is Dardoodle.

Video: The Walking Dead As A Dr. Seuss Story