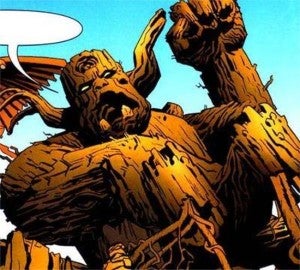 In support of tomorrow's release of Riddick, star Vin Diesel appeared on Conversations With Maria Menounos (just posted to YouTube) and, among other things, confirmed that he is indeeed going to play Groot. He cited the concept art for the character, which he said was some of the best he'd ever seen, for giving him the push he needed to accept.

When James Gunn brought him the idea of voicing a character traditionally known for saying only one line, Diesel said, he thought there was something interesting and challenging about that, and it reminded him somewhat of the challenge of doing a Riddick film where he didn't interact with the other actors for the whole first act.

He also discusses his role with Marvel, and the idea that there's...something...coming in 2016 that he's going to be a part of. Could it be a Guardians of the Galaxy sequel so soon? Well, he actually sort of makes it sound like it's something else entirely, and the Guardians was done in part to quell the question of why he hadn't teamed up with Marvel yet.

"Team up," being an interesting phrase since he calls the next big thing a "merging of brands." Hmm...!

Guardians of the Galaxy hits theaters on August 1.

Vin Diesel: "From That Moment On, I Was Groot," Teases More Marvel Movies