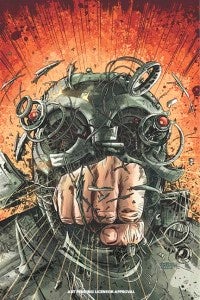 , Solar: Man of the Atom, Magnus: Robot Fighter and The Occult Files of Doctor Spektor will return to publication for the first time in years in 2014, featuring an all-star lineup of creators who are bringing them to life at Dynamite.

The Gold Key properties, who were once published as part of the Valiant Comics universe, have been the subject of quite a bit of backroom wrangling over the years, but it's Dynamite--who also bid for Valiant when those properties were made available, but lost out to the company that currently publishes them--who have managed to make it happen. 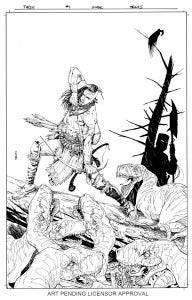 "For sheer thrills and adventure, this book is going to be a blast to work on," Pak said. "And I'm always drawn to stories that feature diverse casts, so I love that a Native American hero headlines the book. I'm also loving the worldbuilding we're doing. We're exploring the reasons why dinosaurs walk the earth and all of the social, historical, ecological, and political ramifications that follow. This is huge adventure combined with mind-bending alternate history, and I couldn't be happier."

"Launching a publishing event like this is an exciting opportunity to show how it can be done well, stylishly, and cohesively,” said Waid, who will write The Occult Files of Doktor Spektor. No artist is yet announced on that title. “The key (no pun intended), as far as I'm concerned, is to get to the core of these characters so we can, with dynamism and confidence, tell the readers who they are, what they want, and why fans will invest in that.”

Fred Van Lente and artist Cory Smith will re-imagine the Magnus: Robot Fighter series, with a lot of inspiration taken from Russ Manning, who created and worked on the series decades ago.

"I'm thrilled and honored to be reviving such a beloved series," Van Lente said. "I loved the original Russ Manning book as a kid, and am looking forward to bringing science fiction action to the new series in a thought-provoking way. The very nature of robotics questions what it means to be human -- that's ultimately what Magnus: Robot Fighter will be about. That, and punching robots until they explode. There will be a lot that old-time fans will find familiar, but the science of robotics and cybernetics has advanced considerably even since the last time Magnus had a title, and you'll be seeing a lot of those reflected here." 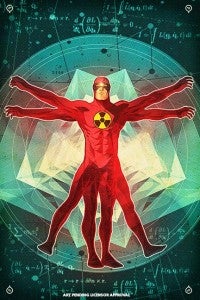 Frank Barbiere will tackle Solar: Man of the Atom, the last book in the launch. No artist is yet announced for that title, either.

"Dynamite has lined up some of the top talent in the business for the new universe of books, and I am both excited and flattered to be part of it," said Barbiere. “I think fans are going to be thrilled by the new directions we're taking with many of the properties, Solar included. I'm a huge fan of the character and will be putting a unique spin on the mythology with an emphasis on family and character. I'm hoping my take will resonate strongly across the readership, new and old alike, and I'll certainly be bringing a lot of new and exciting things to the table."

Solar is a creator-favorite; Superman and Captain America veteran Dan Jurgens recently singled it out in a ComicBook.com interview as the book he'd most like to return to.

"I enjoyed doing the book, found the character and set-up quite compelling and had lots of material planned going forward" before Valiant folded, Jurgens said at the time. Maybe a future miniseries?

All Five The Twilight Saga Films Coming to Netflix in July