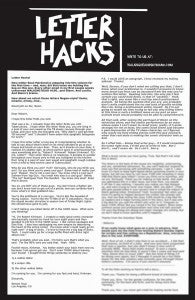 In the "Letter Hacks" letter column in the back of The Walking Dead #102, one of the actors from The Walking Dead on AMC wrote a surprisingly nasty (and pretty funny) letter to series creator Robert Kirkman,

The performer in question was upset that the character they play on the AMC series was killed off in particularly spectacular and gruesome fashion in July's The Walking Dead #100, so if you haven't read that issue yet and don't want to be spoiled, stop here.

We're not going to tell you again: Spoilers.

In any event, Steven Yeun, the actor who plays Glenn Rhee on AMC's The Walking Dead, wrote the letter at left to the column, and it was scanned in by a forum user at Roamers and Lurkers. Pretty funny stuff, but following the equally tongue-in-cheek reply from Kirkman in the letter column, one would think that maybe the whole thing would just die down.

Not so, says Yeun, who suggested earlier today in an interview with The Hollywood Reporter that fans probably haven't seen the last of him in the letters page.

Asked whether his character dying a high-profile death in the comics had resulted in any on-set "ribbing," Yeun responded, "I just wrote that letter to Robert Kirkman (in the comics) and he wrote right back. We might keep that going. I told him I was going to send write to Letter Hacks. I wrote, 'Dear Mr. Kirkman, I hope this letter finds you well.' That was the first two lines I got out, then I thought, 'No I don't.' And from there I just went with it and wrote, 'Actually I hope this letter finds you with Tuberculosis,' which is a pretty terrible thing (laughs). I would assume that he'd write back but what he did write back was hilarious. You should watch out for something back, it might not be issue by issue but we'll see what happens."

Kirkman's response, which is largely not safe for work, can be seen in the image provided.

For Kirkman's part, he told Entertainment Weekly earlier this month that killing off a character who existed on the show was an oddity for him, as well.

"I did see him at a few events because the issue came out the week of Comic-Con. So we had some AMC dinners and we were on panels together and did a lot of press and various functions. We ran an obstacle course together! And it was very awkward for me. It’s very difficult for me to say this without spoiling who it is but this is the first time I killed a comic character and had to encounter the actor after doing it. So it was a little awkward. I just kind of walked up to him and was like, 'So, um… Sorry?'

"The really weird thing about it is that it’s an extremely gruesome death. So, if I had had any kind of argument with this actor, it would have seemed like I was getting my frustrations out or that I didn’t like the guy or something. So it was really funny to me to think about how he would take it and what his reaction would be to it. He just thought it was awesome. So that was a relief."

The third season of The Walking Dead kicks off on Sunday night on AMC.