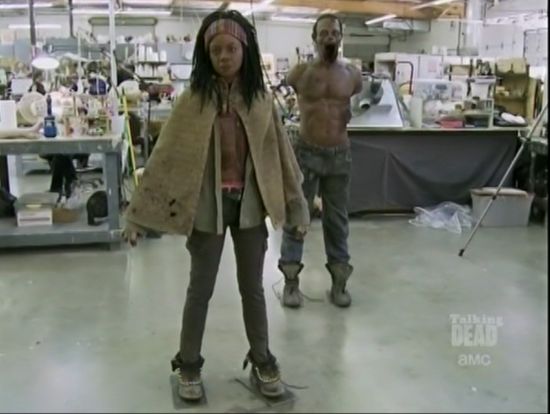 During tonight’s Talking Dead show, host Chris Hardwick talked to Co-Executive Producer Greg Nicotero about what AMC would be doing for The Walking Dead at 2012 San Diego Comic-Con.

Nicotero said, “For Season 3 we’re sticking with the iconic theme or recreating a great moment from the show, and what we’ve done is we’re going to recreate Michonne with her pets, but there will only be one pet, and visitors to the AMC booth will actually be able to walk up and put the collar and chain around their neck and be the second pet.”

In order to create the scene for Comic-Con, Michonne actress Danai Gurira had to go through a head cast to create a clay version of her face. It was molded, and a silicone head was created. The same thing had to be done for one of the pets. Fans at Comic-Con will have the opportunity to pose with the sculpt of Michonne and one of her pets at the AMC booth.