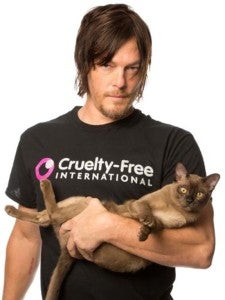 The Walking Dead's Norman Reedus wants to help put an end to animal cruelty. Reedus has joined Cruelty Free International to support the organization's work to ban animal tests for cosmetics in the U.S. and around the world.

Norman Reedus said, "Scores of countries around the world are beating the U.S. to become cruelty-free by banning cosmetics tests on animals. Nobody wants rabbits or guinea-pigs to suffer for our vanity, least of all the animals. Let's stop their suffering right here, right now. Join me in supporting the Cruelty Free International call to Congress and the FDA to bring an end to animal testing for cosmetics in the U.S."

In March 2013, animal tests were banned for new cosmetics sold in all 28 countries in the European Union including the UK, Germany, Spain, Italy and France, making it the most rigorous far-reaching animal testing ban in the world. This significant historical milestone was achieved after over twenty years of campaigning by Cruelty Free International's founding organization, the BUAV. Countries around the world are following suit - Israel has a ban on animal tests for cosmetics and India is likely to set down rules banning this cruel practice in the near future.

Despite progress in some areas, over 80% of countries around the world still allow animal tests for cosmetics, including the U.S., Australia, Korea and Japan. Some countries, including China, actually require animal tests before products can be sold there.

Cruelty Free International Chief Executive, Michelle Thew, stated, "We are delighted that Norman has joined our mission to end cosmetic tests on animals worldwide. Norman is using his voice on behalf of the countless animals who suffer in laboratories in cruel and outdated tests for consumer products. It is vitally important that the U.S. moves with the times and protects animals from unnecessary tests by embracing modern, non-animal science. Please visit https://www.crueltyfreeinternational.org to see what you can do to help animals today."