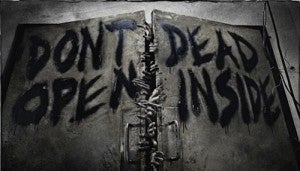 The weekend before fans get their first substantial look at the upcoming third season of AMC's The Walking Dead at Comic-Con International (and ComicBook.com will be there), AMC will run a "Season 3 Preview Weekend" on July 7 and 8, beginning at 8:30 a.m. and running all day long, playing all 19 episodes of the first two seasons of the hit zombie drama and culminating with a live screening of Talking Dead, the network's talk show dedicated to post-gaming the episodes. Series creator Robert Kirkman will appear on the episode in one of his first official interviews about season three.

"Throughout The Walking Dead Marathon, Hardwick will introduce each episode from the set of season three in Atlanta, giving viewers a glimpse of the new sets. Along with several cast members and producers, he will set up the storyline from each episode, and discuss the classic moments and unique characters featured. In addition, every episode with be wrapped with exclusive character and scene-specific content from the first two seasons, including behind-the-scenes footage and sit-down interviews with the cast," says AMC in a press release announcing the event.

The Walking Dead's third season will air on AMC beginning in October.