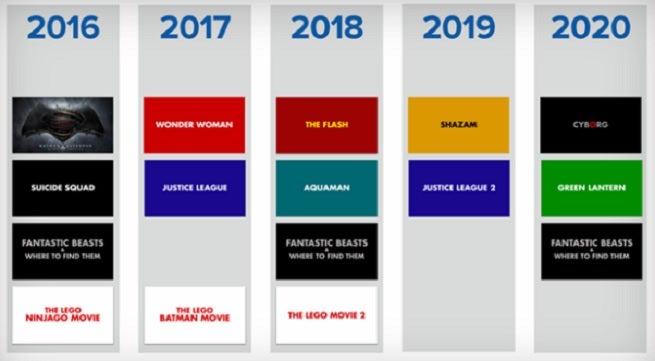 The film, directed by Zack Snyder, will be divided into two parts, as the rumored third and fourth Avengers movies are expected to be.

He also surprised the industry with announcements of more than half a dozen movies including Wonder Woman, Suicide Squad, Green Lantern and Cyborg.

The film had previously been semi-officially announced by Warner executives during an interview about the future of DC on film, but in the time since, fans, reporters and even Warner have said that announcement wasn't quite the real thing.

Tsujihara, who took over as CEO last year, has long been a champion of DC Entertainment; he was head of Warner Bros. Home Entertainment, and so oversaw numerous DC Universe animated feature films, before he took the CEO job. He also was well known as a champion of digital comics, and it was his philosopy on digital comics that's widely credited with making DC the first major publisher to embrace day-and-date digital with the launch of the New 52, reshaping the landscape of the comics economy.

Four a-list stars are in talks to join Suicide Squad, which will be directed by David Ayer, as announced already. That film is planned for 2016, after Batman V Superman: Dawn of Justice. Tsujihara called it "a gritty story of a team of supervillains who take on black ops missions for the U.S. government.

2017 will see the relase of both Wonder Woman and the first Justice League film.

"We're bringing back the cast of Batman V Superman with a cast of other well-known and highly-anticipated superheroes," said the CEO of Justice League. "Wonder Woman is an iconic female superhero fans have been anticipating for many years."

2018 will bring The Flash, starring Ezra Miller, and Aquaman. With all of this new information, they finally did confirm that Jason Momoa will play the role.

"Fans among the world will become more acquainted with [The Flash] through our hit show on The CW," said Tsujihara of marketing The Flash.

Shazam, which had been expected by many to be the first film post-Batman V Superman, will actually not hit theaters until 2019, the same year as Justice League Part 2.

While they don't yet have release dates, he also confirmed that Cyborg is in development with Batman V Superman's Ray Fisher and that they're working on a Green Lantern movie again. Those films are listed on the schedule above as 2020.

Tsujihara also confirmed that the studio is working on stand-alone Batman and Superman films, although no release date was mentioned for them.