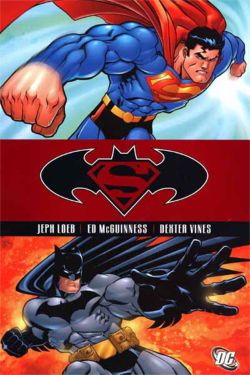 hasn't even hit stores yet, and already Warner Bros. and DC Comics are announcing their next animated project. On Monday, Warner Bros. confirmed that the sixth feature in the DC Universe series would be Superman/Batman: Public Enemies. The movie will likely be released direct to DVD later this fall. The Superman/Batman feature is based on the first six issue story arc in the comic book series of the same name. Spoiler Alert: The story takes place while Lex Luthor is President of the United States. During his presidency, Luthor sways public opinion against the Man of Steel with the revelation that a large kryptonite meteor is hurtling towards Earth and orders the heroes of earth to arrest Superman. Smelling a rat, Batman becomes a fugitive himself as he helps Superman expose Luthor's plot. Public Enemies may not be the only Superman/Batman story arc to join the DC Universe animated line-up. In an interview with Comic Book Resources, original storyline writer Jeph Loeb suggested that the Supergirl storyline in which Superman's cousin is placed back into the Post-Crisis continuum would also make a good animated feature. No word has been given yet as to who'll voice the Last Son of Krypton or the Dark Knight. But if it was up to Loeb, Tim Daly and Kevin Conroy, who voiced the duo in 1998's epic Batman Superman Movie, would get the nod. "Just get me the cast from Batman: The Animated Series and Superman: The Animated Series. Those guys rock," Loeb told Comic Book Resources. Those wanting to get an early jump on Superman/ Batman: Public Enemies before it hits stores should check out issues 1-6 of Superman/Batman or the collection Superman/Batman Vol.1 Public Enemies.