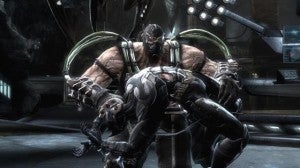 Most insiders knew when Kevin Tsujihara took over as CEO of Warner Bros., that it was going to signal a major shift for DC Entertainment, one of the company's imprints and a brand that Tsujihara has been intimately involved in throughout his time with Warner (he helped to spearhead their earliest digital comics initiatives). Recent comments by the executive have pointed to DC playing a major role in the movie studio's future, with two out of every dozen major movies he hopes to greenlight coming from DC properties. Now, he's said that the Warner Games brand will be similarly influenced by DC's stable of characters. "We are by far the biggest – probably the only studio that's making money on the game side like this," Tsujihara claimed. "It's a business that we've built from scratch with some acquisition but we have really three key franchises to date. It's the local franchise, it's the Mortal Kombat franchise, and it's the Arkham of Batman franchise, those three are very significant. We are having a very good year. We have two more big games coming out, LEGO Marvel coming out as well as the next installation of the Batman Arkham series coming out in October as well." He added that in addition to the DC and Marvel games currently treating Warners pretty well, DC properties will be a big part of the studio's future. "We are on track to having a great year in games and we feel very good about where that's going," said the CEO. "And as you said it's being driven – the new franchises that we are going to be zoning are going to be DC franchises. We think there is big opportunities to build off of what we are doing throughout the rest of the company in games as well."