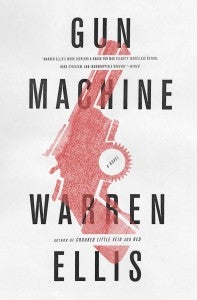 Fox has purchased the rights to a television adaptation of Warren Ellis's forthcoming thriller Gun Machine, sight-unseen, according to Deadline Hollywood.

Says the article, "The TV series adaptation, a thriller about a beleaguered New York City detective who stumbles upon a cache of hundreds of guns that trace back to a wide array of seemingly unrelated unsolved murders, will be written by Trauma creator Dario Scardapane and produced by 20th Century Fox TV and studio-based Chernin Entertainment."

The prose novel, Ellis's first since Crooked Little Vein,  isn't out yet, but rumor has it that a handful of copies have been circulating for a while and that it's a great read.

“Chernin and Fox pursued Gun Machine with great passion and intelligence, and I couldn’t be happier to be making this show with them,” Ellis said.

Dragon Ball Fandom Goes to Bat Over Its Most Controversial Beliefs