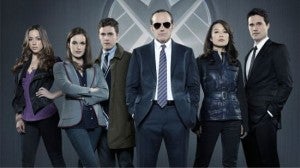 What is "Level Seven?" Well, if you watch trailers for Marvel's Agents of S.H.I.E.L.D., it seems as though it's a security clearance. But in Marvel's The Avengers, it has a decidedly different meaning. "Coulson, get back to base," Nick Fury says in the opening moments of the film. "This is a level seven. As of right now, we are at war." At the words "level seven," we even get a little bit of a reaction (albeit a subtle, silent one) out of Cobie Smulders as Maria Hill. So here's the question: Are the titular agents in the TV series essentially always at war? Is that why they're "level seven?" Or is there something else? It could--plausibly--be just a coincidence, but the odds of that seem pretty low given the fact that they've been using "Level Seven" as a kind of cool catchphrase on the Agents of S.H.I.E.L.D. social media sites. Besides, that's the same scene in which Nick Fury mentioned "Phase 2," which turned out to be something kind of significant in the grand scheme of Marvel's long-term plans. And what's this all got to do with the mystery of Coulson's return? Coulson is the common denominator between these two seemingly-disparate definitions for "Level Seven," so perhaps he's the piece that makes that particualr puzzle fit together and it's a little more complicated than either of the obvious answers presented in either the show or the film. Only the notoriously spoiler-averse Clark Gregg knows for sure--so we'll have to wait until at least the Agents of S.H.I.E.L.D. panel at Comic Con later this week before we know if this means anything important.

Was Agents of S.H.I.E.L.D. Subtly Teased in The Avengers?