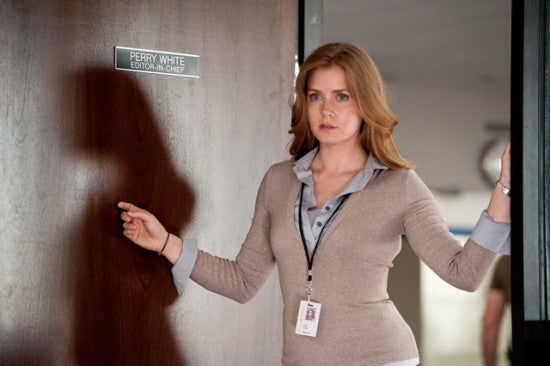 How early on in the process did Lois Lane actress Amy Adams learn that Zack Snyder and David S. Goyer planned to include Wonder Woman in Batman vs. Superman?

Well, actually, it was earlier this week, when she was doing an interview with Collider.

So you can see the video below, in which the reporter starts to ask her thoughts on the Wonder Woman casting and is stopped by a slightly-surprised Adams saying, basically, that she's just now learning (from the reporter) that the character will be in the film.

"Oh did they? I don't even know so clearly I'm not the person to talk to," Adams laughed. "That's awesome, I hope I get a scene with her. I love working with the gals. I think we start [filming] in February, it's sort of the plan. I'm excited, I think it's going to be awesome!"

Now, of course it could be that if Adams hadn't heard a casting announcement she's just playing dumb in order to avoid being the person to "confirm" the news for a sneaky blogger--but either way, check it out below.

Watch Batman vs. Superman's Amy Adams Learn Wonder Woman Is In It