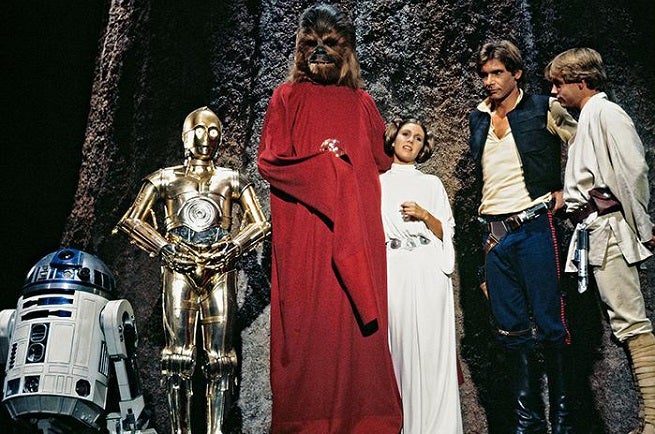 YouTube user Tom BetGeorge has what has to be the coolest and possibly the most insane Star Wars Christmas experience of the year: an elaborate light show set to the tunes of some of the franchise's most iconic songs.

The audio is broadcast along an FM frequency, so that onlookers can enjoy the experience but he's not blasting noise out into the neighborhood at 3 a.m.

You can check it out below, along with commentary from the user.

Here's my tribute to my favorite songs on Star Wars! The display has been featured on ABC's The Great Christmas Light Fight and twice on ABC's Good Morning America. I sequenced the show using LOR, mixed the music/sound effects with Digital Performer, and filmed it using a 35' lift at 3am :) This is now my second year decorating. I built all the props using wood, metal, acrylic and corrugated plastic. I am a music/teacher director for a living (COVA Conservatory in Oakland and Centerville Presbyterian Church in Fremont), hence the massive instruments! If you look closely (especially during the Cantina song) the instruments are playing the real notes! The beams can be seen for miles but I went out of my way to avoid shining the beams on houses and flight paths. The neighbors are very supportive especially since I use the display to raise money for the poor and homeless through my church. The guitar is 17', the piano is 19' and the drums are standard. About 12,500 channels running around 100,000 lights. Also, Come by and see it in person on the corner of Lafayette and Ruschin in Newark most nights from 6-10pm. Because of the light beams on the roof, I turn off the display in heavy rain. Fair use for educational purposes. Merry Christmas everyone!