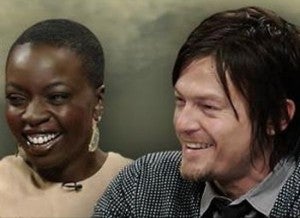 As far as secrets about the rest of the season, Reedus said, “It’s full blown war. There’s some more death of course.”  For her clue about what happens next, Gurira said, “Lots of revenge may be on the horizon.

When Larry King asked if any past characters were coming back, Reedus said, “No, I don’t think so. Can I say that? Am I wrong?” Then, Gurira said, “You are…I’m not sure.” Of course, there’s a big rumor that Morgan from season one will be returning for an appearance in season three.