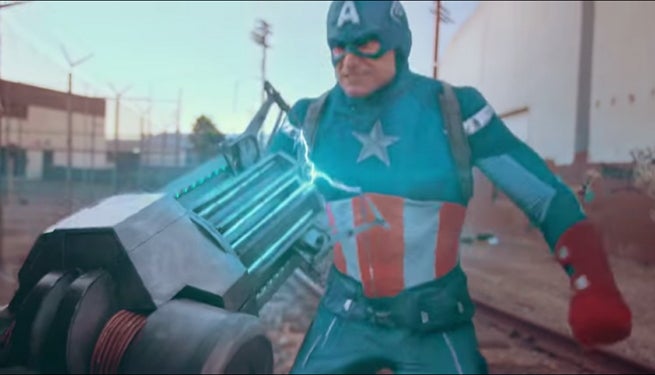 When the Minecraft Guy finds the Tesseract, he brings to some of his buddies, and Master Chief opens a portal. Captain America, Thor, and Wolverine show up, and things get ugly from there.

Of course, Marvel Heroes are used to fighting video game characters, having three Marvel vs. Capcom video games under their belt.

Heroes from the comic universe and gaming universe collide over an artifact from the gods. Who will emerge victorious?

Help us make more awesome videos like this one. Consider supporting us on Patreon! https://www.patreon.com/corridordigital

Thanks to Brandon and Hudson White for playing Captain America and Thor! Check out their channel at https://youtube.com/buffdudes

Jake Roper of Vsauce3 killed it as Ash Ketchum. Check him out at https://youtube.com/vsauce3

Lilan Bowden brought Alyx Vance back to life once more. Thanks Lilan!

Coty Galloway played Wolverine, the role he was born for.

Jake Watson not only produced the piece, but played Master Chief as well!

And finally, this video was directed by Wren Weichman. Nice debut!

Check out behind the scenes! https://www.youtube.com/watch?v=pZwC_...