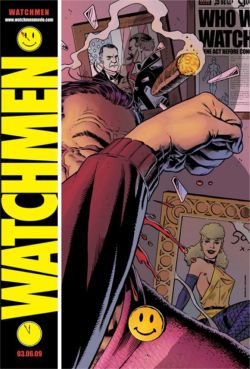 In a discussion panel during this year’s WonderCon 2009, Director Zack Snyder announced that the director’s cut version of the Watchmen movie could have a limited run in theaters. The director’s cut could hit the big screen as early as July. If and when the longer version of the film will run in theaters is dependent on the success of the shorter theatrical cut, which debuts on March 6th.

Regardless of how well the shorter version does at the box office, Snyder promises that the director’s cut would still be released on DVD sometime in the fall.

According to Geeks of Doom, some of the scenes that will appear in the director’s cut is footage documenting the role Edward Blake plays throughout American History and the death of the original Nite Owl. It was revealed earlier this year that an animated version of the pirate mini comic, Tales of the Black Freighter, would also appear throughout the plot of a director’s cut DVD version of Watchmen. Watchmen: The Director’s Cut is set to run at about 3 hours and 10 minutes, about an half hour longer than the March 6th release.