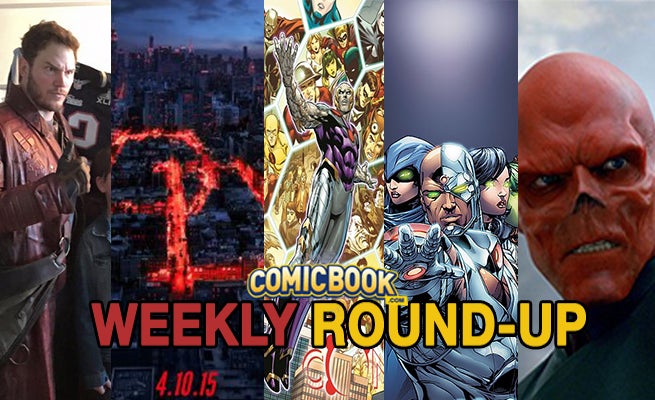 The week of February 6 was an exciting one. Unfortunately, no trailer for Batman vs. Superman was released for the Super Bowl or with Jupiter Ascending, as many thought would be the case, but Marvel's Daredevil released an exciting trailer!

Marvel released a trailer for the upcoming Daredevil Netflix series which will be released April 10.

The roster for the upcoming TNT series was revealed when the show's pilot script leaked.

Chris Pratt and the Seahawks lost Super Bowl XLIX to Chris Evans and the Patriots. Pratt paid up on his end on their wager and visited Christopher's Haven in ravager garb, a.k.a. as Star-Lord.

A Venezuelan fan of the Red Skull treated himself to some permanent cosplay, getting implants in his face and part of his nose cut off in the process.

The comic publish announced a bit of an overhaul following Convergence, including the elimination of New 52 branding and 24 new titles.

We know what the most bizarre story of the week was after seeing that list, but what was your favorite story this week? Are you excited for any of DC's new upcoming titles? How about the Titan's roster? Daredevil? Let us know in the comment section!

You can also go vote for the 2014 Comic Movie Awards! Several categories are open. This week, Best Actress and Best Soundtrack opened.