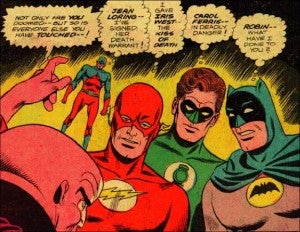 Bruce Wayne will most certainly not be the "iconic" character DC Comics is planning to out as gay, according to a tweet from Batman series writer Scott Snyder. That might be a no-brainer to comics fans, but wild speculation has been running pretty rampant in the mainstream press following DC's announcement, with off-limits characters like Batman and Superman being name-dropped as possibilities.

The firestorm over DC's retroactively-gay character comes, of course, on the heels of a mini-controversy generated when Batman Inc. and Action Comics writer Grant Morrison told Playboy that he felt there's an inherent undertone of homosexuality built into the concept of Batman.

"He’s very plutonian in the sense that he’s wealthy and also in the sense that he’s sexually deviant," Morrison said in the interview, which delved into the psycho-sexual makeup of a handful of characters. "Gayness is built into Batman. I’m not using gay in the pejorative sense, but Batman is very, very gay. There’s just no denying it. Obviously as a fictional character he’s intended to be heterosexual, but the basis of the whole concept is utterly gay. I think that’s why people like it. All these women fancy him and they all wear fetish clothes and jump around rooftops to get to him. He doesn’t care—he’s more interested in hanging out with the old guy and the kid.”

Snyder, meanwhile, identifies Bruce as "Gothamsexual," saying that "he has no time for anyone but Gotham," but assuring fans that there are no plans to reveal him as having an attraction to men.

But what if he were? Smallville writer Bryan Q. Miller, who has written for the bat-family of books fairly recently himself, chimed in: "Even if he WERE, that wouldn't change a thing about his mission/purpose/character."

What if Batman Was Gay?