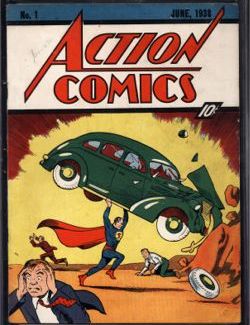 How does President Barack Obama know the economy is getting better? Because a rare Superman comic book just racked up a record price at auction. The comic book in question was a copy of Action Comics #1, which featured the very first appearance of Superman and was published in 1938. There are only around 100 copies of Action Comics #1 known to exist, and the copy up for auction at ComicConnect.com was in exceptionally good condition comparatively to other known copies. The auction copy had a CGC grade of 6.0 and was listed as having white cream pages. The final auction price paid for the comic book on Friday, March 13 was an amazing $317,200. While this price was a record auction price, it was slightly lower than the all time highest price paid for a comic book, which is said to have been $350,000 for a copy of Marvel Comics #1. While the winning bidder for the comic book was not a comic book collecting President, he was a rock star. The winning bidder was John Dolmayan, who is the drummer for the rock band System of a Down. Dolmayan is also the owner of the online comic book store TorpedoComics.com, and he reportedly bought the rare comic book for a client.