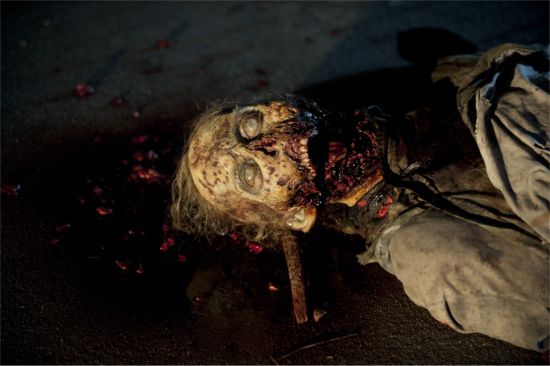 Two Governor Episodes – There are reportedly two Governor-centered episodes. We’re expecting that Episodes 406 and 407 are likely The Governor episodes. AMC hasn’t released any sneak peek photos for either episodes, so the network was likely trying to keep it under wraps that these episodes center around what The Governor has been up to.

No Daryl – Norman Reedus fans will likely be in for some rough times. If the next two episodes are The Governor Episodes, then Daryl probably won’t appear in the episodes. Daryl barely appeared in the “Internment episode, so Reedus fans will have to suffer through three weeks of little or no Daryl.

Mid-Season Finale Showdown – If the next two episodes center around what The Governor has been doing, then Episode 408 will likely focus on The Governor attacking the prison (assuming he decides to go that route.) Episode 408 is the mid-season finale, so it makes sense that something big would happen on that episode.

The Governor’s Motives Will Be Revealed – It’s hard to get a read on what The Governor is thinking when he’s looking at the prison. Is he there to exact his revenge? Or does he just see the prison as a safe place that he would like to have for himself? The next couple episodes should reveal what type of man The Governor has become since the Season 3 finale.

Long Wait To Find Out Daryl & Tyreese’s Reactions To Carol News – Assuming Rick tells both Daryl & Tyreese what happened with Carol, it will be interesting to see their reaction. There’s a possibility that Rick might not tell Tyreese, but with everyone else in the prison knowing, it would be difficult to keep it secret from just Tyreese. Given that Daryl was outraged by the killings but was also very close to Carol, everyone is anxious to see what his reaction will be. Will he stay loyal to Rick? Or will he be angry that Rick sent Carol away? Unfortunately, fans might have to wait until the third episode from now to find out.

What The Walking Dead’s Shocking Ending Really Means For Fans