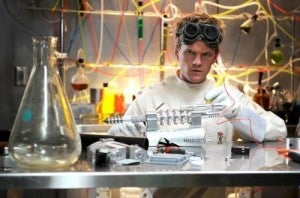 In a statement made earlier today, the CW Network revealed that they will air Dr. Horrible's Sing-Along Blog in its entirety on October 9. Airing at 9 p.m., the miniseries--which debuted on the Internet and has remained there, streaming on sites like Hulu and Netflix as well as being released to DVD--was written by Maurissa Tancharden, Jed Whedon, Joss Whedon and Zack Whedon, with music by Jed Whedon and Joss Whedon. It has inspired comic book spinoffs and a sequel is in development. A quick run-down of the hilarious, fan-favorite series for the uninitiated:

Created as a three-part online musical in 2008 by Joss Whedon (The Avengers, Buffy the Vampire Slayer), the series stars Neil Patrick Harris (How I Met Your Mother) as Billy, A.K.A. Dr. Horrible, a budding super villain whose plans for world domination continually go awry.  His two goals: getting accepted into the Evil League of Evil, and working up the guts to speak to his laundromat crush Penny (Felicia Day, The Guild).  The only thing standing in Billy's way is his superhero arch nemesis, Captain Hammer (Nathan Fillion, Firefly, Castle).  With one big score, Billy could get into the E.L.E. and earn the respect of Penny, but only if he can keep her away from the dashing Captain Hammer...

The series came at the tail end of a career renaissance for Harris, following on the heels of fan-favorite roles in Harold & Kumar Go to White Castle and How I Met Your Mother. The actor, who apparently can only star in things with oddly long titles that prominently feature the letter H, has only gotten popular since, becoming one of show business' favorite awards-show hosts and winning armfuls of awards for his portrayal of the lovable, womanizing sociopath Barney Stinson on HIMYM. The news was actually broken at San Diego Comic-Con International earlier this month, but not picked up on because in the flurry of Firefly news it didn't seem as remarkable that a project which had already been in circulation for years might make it to TV. Still, Whedon told fans at Comic-Con that the second season of the popular series is currently being written, with an eye toward filming it in the spring. The proximity of those two pieces of news, of course, has led many fans to speculate as to whether or not Dr. Horrible 2 may appear on The CW.