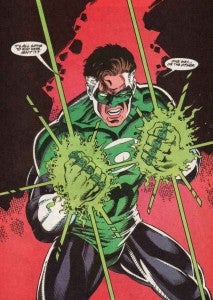 Flashback with me, if you will, to 1993. Hal Jordan, the star of DC Comics's Green Lantern series, is widely considered too boring and whitebread for most people. This depiction might go all the way back to his portrayal as the stodgy right-winger in the old Green Lantern/Green Arrow "odd couple" comics from the '70s, but whatever caused it, DC had a very difficult time shaking the impression. Things probably weren't helped any when Emerald Dawn--the publisher's attempt to reinvent Hal as someone more complex and relatable and frequently compared to John Byrne's Superman reboot Man of Steel--gave the hero a drinking problem and a troubled backstory...but also graying hair, placing him squarely older than most of his fellow DC heroes. Suddenly he was the Reed Richards of the DC Universe; in a post-Crisis on Infinite Earths world where the publisher had de-aged almost everyone (not unlike the New 52), Hal inexplicably stayed the same age, even though he lost much of his history in the process. It was like the worst of all worlds, and it made him even more dull and generic in the eyes of many fans. That was especially true as Image rose to prominence. Savage Dragon was being bloodied and impaled on the page and Rob Liefeld's dynamic art style didn't yet have the same stigma attached to it that it later would--so M.D. Bright and Gerard Jones's fairly staid interpretation of Hal in his own monthly book seemed a bit lifeless compared to a lot of what else was on the market, especially what was on the market with single- and double-digit issue numbers. 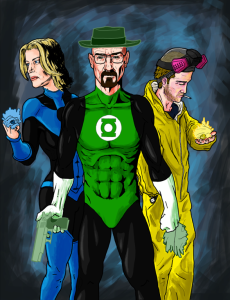 DC was desperate to "fix" the ailing series and so they turned to something that had served them well in the recent past: changing the title character. Superman had died briefly and enjoyed unprecedented sales success during his absence and immediately following his return. Batman's back had been broken and much of that story burned up the charts, as well. For Green Lantern, though, it seemed DC had something a little more permanent in mind. After all, it's built into the DNA of the concept that there can be another Green Lantern; he doesn't have Superman's powers or Batman's mind; he's got a ring. And as you can see in the image above, those rings are removable. And Hal, being a legacy hero himself, was a bit more replaceable in the publisher's eyes. Remember that this was the '90s. In the mid-'80s, they had gotten rid of Barry Allen as The Flash and had, to this point in their history, not looked back. Flash forward a ways. Hal suffers a great loss; he's traumatized, has a break. He goes bad and kills most of the supporting cast, plus lots of other people along the way. And in a few months, what happens? Green Lantern, as a title, is more popular than it's been in years. The new lead is widely liked by the readership, except for a vocal minority who throw up a kind of cult-like devotion to Hal. That group, though, stays strong and vocal through nearly a decade of Kyle Rayner-as-Green Lantern stories, ultimately winning an increasingly nostalgic DC Comics over to their way of thinking. When Hal's brought back, they bend over backwards to explain away his actions, but at the end of the day, it was just built too far into his mythology. After a decade as a dangerous and unstable villain, nobody could see him as the straight-laced, clean-cut Republican superhero anymore. Even when he went back to the Air Force, he became a rebel again, taking his hard-drinking and troubled past and carrying it with him to the present (minus the drinking because comics don't show that kind of thing anymore). He was made to seem more young. He was given a sense of humor. He was (finally) given challenges that were worthy of his substantial power set and years of experience. In short, Hal Jordan broke bad--and in spite of some token protestations by readers and members of the DC Universe, he was forever changed--some might argue for the better. Certainly the public perception of the character changed. Gone was the boring boyscout, replaced instead by a flawed, relatable character who never totally bounced back from the feeling that he was kind of...not such a good guy. When Hal was a black-and-white hero, fans were bored with him. When he broke bad, fans (by and large) rallied around him, either loving him or loving to hate him. When he came back? The love remained. A tiny bit of the edge remained, even as the publisher did their best to drain it out of him and make people forget. And suddenly, he was one of the most reliably high-selling characters DC had. Yay evil!