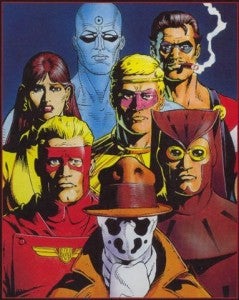 The classic Fleischer Superman cartoons credit the source material, alternately, as coming from the Superman and Action Comics “magazines” or from the Superman comic strip by the character's creators, Jerry Siegel and Joe Schuster. It's an accurate description of the source material, and one that was standard for years, with animated series and television adaptations routinely giving shout-outs to the comics and comic book publishers from which their characters sprang.

In the more recent past, though, there have been movies like Watchmen and Constantine, both of which have credited the source material as “graphic novels” in spite of the fact that the material was first (and, in the case of John Constantine: Hellblazer, most frequently) published in serialized magazine form. Are they, really?

Certainly since the mid-1980s when things like Maus started entering into college curricula and granting cache to comics as an art form that it had rarely been given before that, the term “graphic novel” has become something of an attractive enigma. First coined decades before by Will Eisner, the term is used almost interchangeably with the collected editions that mainstream publishers release of their serialized stories. The name of the comics section at stores like Barnes & Noble is “graphic novels,” even if the plurality of their sales come from Marvel and DC collected editions.

Any serious attempt at defining the term is thrown another curve by works like the aformentioned Watchmen by Alan Moore and Dave Gibbons, or Frank Miller's Batman: Year One and The Dark Knight Returns. Conceived as one, long story, the stories were published in serialized magazine format only to suit the economics of the industry—something that still happens in most cases, with rare exceptions like DC's Superman: Earth One or Marvel's upcoming series of introductory, “chapter one”-style stories that are largely designed for success in the bookstore market as much or more than they are expected to perform in the direct market. While the latter are certainly graphic novels, what of the former?

And if you're going to say that Watchmen counts because it was conceived and executed all as one story, but Superman comics are “collected editions” or something because they're part of an ongoing tapestry of stories crafted by a number of creators, what does one say about a book like Artifacts? Published as a serialized, ongoing series, the Ron Marz comic was originally conceived and, for long time executed, as a standalone story. It was only after it was a financial success as a limited series that it was increased to ongoing status and further stories added. It's unclear at present whether the larger story may have been expanded or altered to accommodate the change, but either way a change in the nature of the series certainly lends a further degree to the question.

The question, it seems, doesn't have a real answer. People whose central use for comics and graphic novels is different will answer differently. Can TV directors call themselves “filmmakers” in spite of the fact that in the digital age, nobody uses film and only feature-length movies are referred to as “films” by scholars and critics? It's a similar question.

Chime in on this question in the comments thread!

When is a Graphic Novel Just a Comic Book?