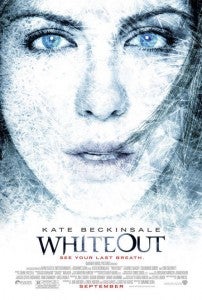 Agent Carrie Stetko's trek across the dangerous terrain of the Antarctic in search of a killer is both arduous and filled with obstacles; however, the journey to the big screen for writer Greg Rucka's comic book series, the basis of the film Whiteout and its heroine, Stetko, has been almost as difficult. Kate Beckinsale stars in the lead role as Stetko, a U.S. Marshall stationed in the most remote of jurisdictions, a research facility in Antarctica, where the rich, frozen landscape of Canada becomes the horizons and slopes of our most icy continent in this long-awaited production. Rucka's vision of a murder in this dangerous location plays out on-screen with enough intrigue, plot twists and fresh takes on the conventional thriller set-up to make it a worthwhile film. The film quickly plants the seeds for the main plot, as a flashback to the mid-1950's shows us a Russian plane, carrying what later becomes important cargo, going down over the Antarctic, not to be seen again. We then fast-forward to modern day and the waning days of regular operation at the Amundsen-Scott Research Facility before the six-month shut-down in the face of impeding weather and darkness. Beckinsale's Marshall Stetko has every intention on being on the plane out of there, along with veteran actor Tom Skerritt as Stetko's closest friend on the base, Dr. John Fury AKA "Doc". A body is called in, found out on the ice, and Stetko, the only presence of law enforcement here, must investigate. What seems to be an accident quickly is revealed to be a murder, and Stetko must act quickly before the shutdown happens and all hope of solving the case is lost. What follows is a series of events that take Beckinsale and co-stars Gabriel Macht, as a U.N. operative that joins in the investigation, and Columbus Short as Delfy, her trusted pilot for her travels, across the Antarctic wild in search of just what gets a geologist looking for meteorites and another member of his team killed for the contents of that downed plane. As more and more is discovered, Stetko finds herself in a life or death battle against a secret killer and the very environment itself. There are plenty of expansive shots here, showing just how indiscriminate and bleak Antarctica is, and there are more than a couple of scenes where Stetko must battle for her life against the killer and the weather, with some personal sacrifices made in the process. Beckinsale capably handles the role, as Stetko undergoes a transformation in the film from burdened, guilt-plagued officer, based on some not too well-placed flashbacks to a horrific incident from her past in Miami, to a confident and resourceful Marshall capable of putting all the pieces together to bring closure to this case. Even in her opening scenes, there's a sense that this woman has the weight of the world on her shoulders, and only she can remove it, scenes of her colleagues partying and celebrating their upcoming sabbatical set against her earnest and serious affect. It should be noted here that there's a scene between Macht and Beckinsale where her past tragedy and current self-doubt are explained logically, negating the need for said flashbacks. The action and suspense in the film comes from its unique use of conventional thriller devices in an atypical setting. The traditional "showdown between killer and hero" is not fought on rooftops, abandoned homes or in an airplane, but rather on a rope line where the characters must anchor themselves with hooks in order to avoid being swept away in the enveloping white of the storm and snow. It's an interesting juxtaposition to have such a close and tight battle taking place while shot against the massive expanse of the base and the white that surrounds it. Key scenes involving the Russian plane allow us to see the skills Stetko possesses in her role as Marshall, as she pieces together events from the past to make sense of the present. There's a constant uneasiness present in the film, as the twists in plot and direction begin to tighten as Stetko gets to the bottom of the murders and the role of the plane's cargo in this series of events. The film does a good job of keeping us off-balance in most spots, as we, like the characters, wonder what will be thrown our way next, and by whom, all the while the clock ticking on the departure of that last plane out of there. As the film makes its way to its conclusion it loses some of its momentum. The final fifteen minutes feel a bit forced and drawn, and the motivation behind the main suspect's actions not fully explained or rationalized, but the overall package delivers a thrilling and inventive adventure, with Stetko able to emerge as the heroine she was always meant to be. Rucka himself has applauded this long-delayed adaptation and with good reason. The film is a fun ride into a land where, as Skerritt's character puts it in the beginning, "nature never intended you to survive."

"Whiteout" and Beckinsale Deliver Thrills and Plenty of Icy Intrigue