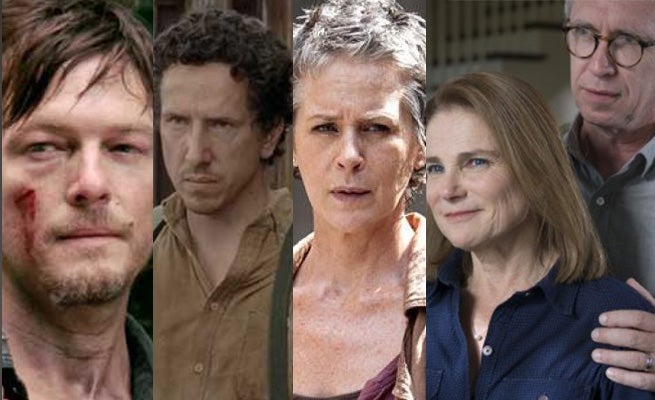 Last week on Talking Dead, The Walking Dead executive producer Gale Anne Hurd promised that “there will be blood, and it’s not all walker blood,” in the season 5 finale. Of course, we all panicked and wondered who is going to die, hoping and praying and sleeping with our pajamas inside out that our favorite characters make it out of the season. Although the show is pretty unpredictable usually and can really hit us right in the feels when it comes to killing characters, some characters seem like they’re on the chopping block- making them likely candidates to have the finale be their swan song.

First of all, the most likely candidate to bid us farewell is Peter Anderson. Last week, I talked all about the conflict between Peter and Rick in the comics and how it opened up a chain of events in the Safe-Zone. It’s clear that Rick and Peter can’t live in the same place and it’s also clear the Rick is not going to leave the Safe-Zone. It’s possible that the show will drag out the storyline longer than the comics did, where we saw Rick kill Peter at a funeral after he killed Douglas Monroe’s wife, Regina. This would probably mean that the writers have to reinvent the series of events leading to the TV version of the DC Scavengers (probably the Wolves), the horde of walkers from No Way Out, and eventually Jesus and Negan, finding our group of survivors. Sorry, Pete, you’re number one on my chopping block.

Then, there’s Deanna. Rick and Deanna will probably never see eye to eye again. That’s a problem. That problem is eliminated if Deanna dies. Even more likely than Deanna, is her husband, Reg. As I mentioned, Peter killed Douglas Monroe’s wife, Regina, in the comic books. The tv series ran a gender swap on the leader of Alexandria, so that would mean Pete kills Reg if the show doesn’t deviate from the comics. I think that Aaron and Daryl will encounter the Wolves, likely hiding the fact that they are with a larger community, and the gun shot of Rick killing Pete will lead them right to the gate.

There’s your cliffhanger and biggest fear all in one. If the Wolves outnumber and outgun Daryl and Aaron, they’ll have no choice but to accompany them on their way to the sound of that gun shot. The group, which has been teased all season by spray paint on walls and W’s on walker heads, will probably demand Daryl and Aaron come with them, ultimately using them as hostages at the get, demanding entry. “No one is safe,” is basically the show’s slogan, so Daryl may be in a bit of trouble if this savage group that ties women to trees to feed walkers finds him and new buddy, Aaron.

Nicholas, you know, that jerk from Alexandria who took Rick’s gun? He’s in deep trouble. He can hardly defend himself, so when he pulls that gun out, it’s likely it’ll be him who in fact bites the bullet. It’s a possibility that the Peter and Rick saga gets drawn out like I said and it is Nicholas who gets killed instead of Pete, drawing the TV Scavengers to the gates.

The Nicholas and Glenn feud can mean trouble for Glenn, too. We're all so busy over looking what's happening on the show, waiting for Negan to come in and smash Glenn's head in like he does in issue 100 of the comics that we're forgetting how often the show switches character deaths. Glenn may be in big trouble for the finale. Whether it's his newly developed arrogance of being right that puts him in a dangerous position outside the gate or just the insecurity of Nicholas that ends up with him needing to prove himself (to himself) that poses a threat to Glenn's life, we can't call Glenn safe.

Eugene had a redemptive moment which is usually the kiss of death. Despite being around today in the comic books, he may be in danger. Abraham seems be getting some development and becoming a leader, so I don’t think he’s in much danger, but the show loves to steer us to that sort of belief only to show us how wrong we were. I think Abraham will be an absolute necessity for the fight against the Wolves.

While it’s never safe to say a character is safe on The Walking Dead, I’ll go ahead and make some predictions in that regard. Rick, Carl, Maggie, and Carol will survive. Rick doesn’t need much explanation because without him, the group disbands and the show ends. Carl has a lot of life to live and (am I awful for saying this?) hopefully an eye to lose. That moment in the comics is epic and Carl has already been shot once, so what’s a bullet through the eye and temple going to do? The fact that he loses his eye plays such a major part for his character down the road, including his new love interest licking the eye scarred eye socket (yes, I'm serious - see issue 137). Maggie has to become a leader and give Glenn a reason to push on, and Carol is nothing if not a survivor at this point.

Who do you think is on the chopping block in the season 5 finale of The Walking Dead? Are there any characters you particularly hope get killed or, on the contrary, really hope survive?

Who Dies In The Walking Dead Season Finale?