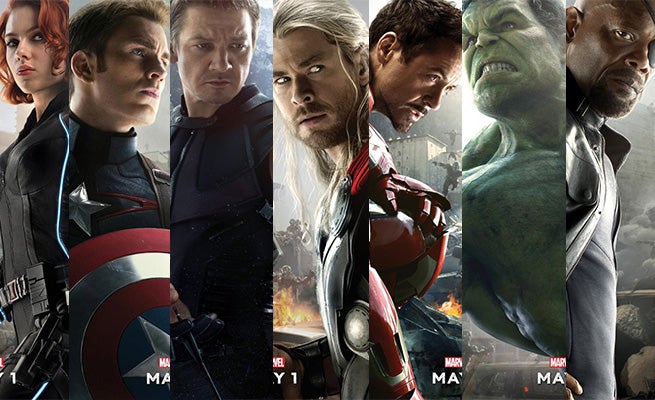 With Avengers: Age of Ultron right around the corner, there is a ton of speculation and questions regarding what is going to happen in the film. We know that by the end of the film there will be a new team of Avengers formed, but not necessarily who will be on that team.

Given Joss Whedon's reputation and ruthless story-telling style, it's a good possibility that we'll lose an Avenger in Age of Ultron. On top of that, in the new trailer released this past week, Tony Stark says to Steve Rogers, "There's no way we all make it out of this," to which Cap responds, "I've got no plans tomorrow night."

Captain America is ready to make the ultimate sacrifice, but will he? Probably not. He is the title character and a main player in the one of the very next films following Avengers: Age of Ultron, which is Captain America: Civil War. Civil War also takes Iron Man off the chopping block given his major part in the storyline there, as well.

Staying on the Civil War train, that probably means that Falcon is in the Safe-Zone, too. He has sort of become Cap's sidekick and since we don't suspect him to have a major role in Age of Ultron but confirmed to appear, I can't imagine him just coming in to be killed off.

We've seen a lot of Scarlet Witch and Quicksilver throughout the trailers. For the most part, they've been fighting alongside Ultron and against our Avengers, but in the latest trailer, we see Scarlet Witch fighting alongside the Avengers for the first time. That raises the question, where is Quicksilver? Is he still with Ultron or did Ultron kill him, causing a swift change-of-heart for his twin sister, Wanda? It's possible that he's just absent from that fight for reasons currently unknown but it's also possible Pietro bites it to give Wanda the push she needs to be on the good side.

While Thor has another film confirmed, I wouldn't relax on the Mighty Avenger. He can be quite childish and immature on the battlefield, but ultimately would lay it all on the line for a cause he believes in. It's not impossible that he is the nail and Ultron is the hammer in this case (only to be brought back to life in true comic fashion for his next appearance).

The one major character who doesn't have any confirmed films coming up is the Hulk. While he's nearly impossible to kill, that doesn't mean Ultron, the super-smart and always-evolving artificial being, doesn't eliminate everyone's favorite rage monster. This would give Tony a solid push toward the Registration Act that will be featured in Civil War considering Bruce Banner and Tony Stark are such good buddies.

Of course, there are Black Widow, Hawkeye, and Nick Fury who have the possibilities of bowing out. Nick Fury has been a staple in the Marvel Cinematic Universe and already died once but could finally exit for good. Black Widow seems unlikely since she's expected to appear in Civil War. Hawkeye is just finally getting his chance to prove himself and fight the good fight because if you remember, he was under Loki's mind control for most part in the first Avengers, so it just wouldn't be fair to send him off!

We do have confirmation that Hayley Atwell, who has played Peggy Carter in Captain America: The First Avenger, Captain America: The Winter Soldier, and Agent Carter, will be in the film. We don't know if it's a flashback, dream sequence, or present day older self, but it's possible that her time comes as well.

Vision, a creation by Ultron simply to prove he can create life, will also play a part in this film. We got our first little glimpse of him in this past week's trailer and it's entirely possible that he is only in the cards for one film. Maybe a self-sacrifice to stop Ultron? It's a possibility.

Who do you think will die in Avengers: Age of Ultron, if anyone? Vote in the poll below!

Who Will Die In Avengers: Age of Ultron?