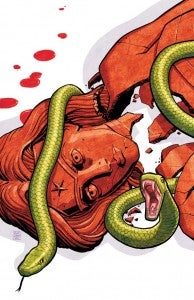 The New York Post is reporting that Wonder Woman has a father in the new DC Universe.

The character, who had previously been depicted as having been breathed to life by Hippolyta from the dirt around Mount Olympus, will have an older man in her life in the Brian Azzarrello-scripted version of her story currently taking place as part of DC's New 52 initiative. And it's a character who has already been playing a role in the book's first issue.

Spoilers after the jump.

Azzarello told The New York Post that in an upcoming issue, "[Wonder Woman is] going to learn she's not who she was told she was," and it ties into November's solicitation that says Hippolyta would share a secret with Diana that will shatter her life "like brittle clay."

See what they did there?

In next month's Wonder Woman #3, it will be revealed that Diana is actually the daughter of Hippolyta and Zeus, an illegitimate daughter to the King of the Gods. The first issue of the title revolved around a mortal woman who had been impregnated by Zeus; hunted by assassins apparently sent from Olympus, the girl ended up turning to Wonder Woman for help. Assuming that baby is born, it will now be Wonder Woman's half-sister.

Could this be the origin of the new DC Universe's Donna Troy?