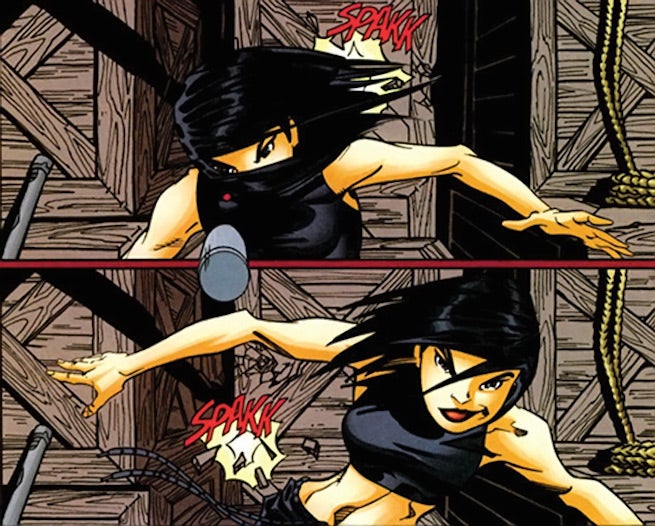 With Batman being the most human of DC’s Trinity, there’s always the looming question of who takes over once Batman either retires or makes his final stand as the Caped Crusader. More than that who could truly replace the Batman?

Gotham certainly doesn’t lack for champions and from Nightwing to the Robins to the Oracle and Batgirl, The Dark Knight has trained more than capable operatives to continue the good fight in his absence.

But are any of them as driven and intense as the original article?

Each of them, along with Barbara, are not only formidable in their own right but each of them possess an aspect of what makes Bruce extraordinary.

Tim has repeatedly displayed that he has the makings of being a master detective and strategist and will one day rival Bruce. When you can outwit Ra’s Al Ghul with a simple maneuver that even Batman wouldn’t entertain (asking for help and calling the Teen Titans to counter measure his 9 assassination attempts), that speaks volumes.

A genius with a photographic memory, a world class gymnast, and an accomplished martial artist, Barbara, like Bruce, is a self-made crimefighter. Even more so given that she lacked Bruce’s resources: his wealth, his tech, his superior training and a sidekick to boot. Much like Bruce, she has the knack for out-of-the-box ingenuity which often results in her gaining victories over far superior foes.

While being paralyzed at the hands oft he Joker would’ve ended the careers of most superheroes, Babs reinvented herself as the Oracle and launched one of the premiere teams in the DC Comics Universe: The Birds of Prey.

Even Jason and Damian are cautionary tales of the downfalls that inevitably follow hubris.

Terry embodies the compassion and heart that makes Batman a hero.

Then there’s Grayson, the “first son” and “heir apparent.” Dick is arguably the most well-rounded of all of Batman’s operatives and as he’s proven with the Titans, he certainly has the skills to lead a most successful superhero team. However the attributes that make Grayson successful as Nightwing are exactly the attributes that put him at odds with his mentor. Grayson established himself and his identity in many respects as the Anti-Batman, in that he set out to prove he could be a successful competent vigilante without becoming as dark and obsessed as Bruce.

While all great superheroes, they all lack the intensity and edge that defines the Caped Crusader. All save for one. “One Who Is All.” For sometimes the best Batman for the job isn’t a man but in a very special young woman. Bruce’s adopted daughter, Cassandra Cain.

The daughter of David Cain and Lady Shiva, two of the deadliest assassins in the DC Universe (not to mention both are former mentors/adversaries of Batman’s), Cass was raised and trained to be “One Who Is All,” the perfect bodyguard for Ra’s al Ghul.

The fact that the offspring of two of the greatest assassins in the DC Comics universe was groomed to be the “perfect bodyguard” for the leader of the League of Assassins says it all right there.

However, after taking the life of a criminal in a demonstration by David Cain, Cass fled and ultimately found herself in Gotham where she joined Batman and his crusade to rid Gotham of crime.

Tim summed up Cass’s journey best, “I've been avoiding you. It's... your background. The assassin training and all that. It's just... my childhood's so normal. I mean, Batman and Nightwing had some rough stuff to deal with growing up, but... but you -- you were raised to be that guy down there, and you turned yourself into one of us. That's... pretty intimidating.”

Although Cass was mentored by Babs as Batgirl, truth is she was more akin to Bruce than any other agent. Cass is certainly Bruce’s ideal which is why she was often his first pick to assist him on assignments. In Cass, he found an equal.

Cass’s abilities as a martial artist made her superior to even Batman. For unlike Bruce who has never been able to best Shiva in single combat, Cass has defeated her mother on three separate occasions.

Casssandra Cain is for all intents and purposes a reimagining of the Dark Knight. For what is the Dark Knight but the story of an innocent child who has been destroyed by evil only to rise from the ashes, reinvent themselves as a weapon against the very darkness that forged them.

But to truly be Batman requires a a dedication to being the peak of human perfection and being obsessed with the mission. To be the Batman is to forsake everything and hone one’s self to be the perfect weapon against the darkest forces.

To be the Batman means to be completely human yet do the impossible. Cass has done all of this time and time again. Not only is she a superior martial artist, but so dedicated to the cause that Batman had to tell her to relax. When the vigilante who only survives on two hours of sleep is telling the young woman who was originally trained to be the perfect bodyguard for the Leader of the League of Assassins to relax, what else needs to be said?

When she temporarily lost her ability to read body language and was forced to go against Shiva, despite having ample opportunity to deliver a fatal blow during their battle, Cass refused to compromise herself. The loss of her gift didn’t stop her from defeating her mother or doing whatever it took to regain her abilities. As she told Shiva, she doesn’t lose.

When she and Batman came into conflict, it resulted in a Kung Fu battle over half of Gotham City. At the end, Bruce asked her where her allegiance truly was. Bruce was stunned when Cass responded pointed that it wasn’t to Bruce but the Bat insignia and what it represented.

When Bruce was presumed dead for a time, it wasn’t Dick or Tim, but Cass who created the Network and organized Gotham’s heroes to countermeasure the rising crime that resulted from Batman’s disappearance. As far as Cass was concerned the mission came first.

While the cowl of the Dark Knight has been worn by many notable heroes, when it comes to being the true successor, Cassandra Cain has always and will be Batman 2.0.

Why Cassandra Cain Is The True Successor To The Batman Mantle