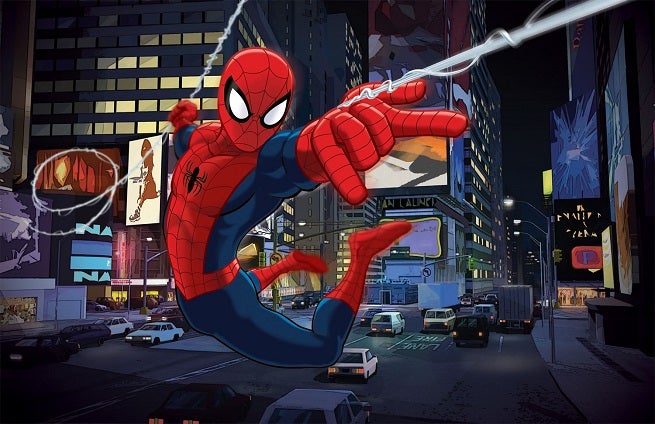 We mentioned this briefly about a week ago, but there's a part of us that really can't shake the idea of Ultimate Spider-Man voice actor Drake Bell as Peter Parker on the big screen.

It's rare that a voice actor seems like such an ideal candidate to transition into live action, and when it happens -- like with Nathan Fillion as Green Lantern or C.C.H. Pounder as Amanda Waller -- it tends to get fans talking.

Bell is one such actor -- young, lanky and a bit dorky, he seems to many to be an ideal candidate for Peter Parker. The physical look of an actor is generally not a dealbreaker, but in the same way that John Wesley Shipp has said he thinks Grant Gustin makes a more believable Flash than he (Shipp) did becuase Gustin is so lithe and looks more like a runner than a football player, Spider-Man should ideally leave a similar impression on the viewer.

Of course, that's an area where the current Spider-Man, Andrew Garfield, does very well. That Sony seems so rudderless is at once an argumentin favor of keeping the actor, who has a rabid fan following, and for jettisoning him.

That last bit, mostly, is because Sony and Marvel would like to come to some kind of agreement that would allow them to share characters back and forth...and Marvel has apparently said they're only interested if they can ditch the baggage of two Amazing Spider-Man movies and oust longtime Spidey producer Avi Arad, who had a bit of a war of words with Marvel's Kevin Feige earlier this year.

Both Arad and his co-producer Matt Tolmach said back in April that they would see a crossover with Marvel as a sign that one or the other studio is creatively bankrupt.

That, along with comments suggesting that he felt Feige had taken credit for work Arad had done during his time with Marvel, likely put them at odds, although none of the leaked Sony memos that provide the basis for the media's Spider-Man knowledge explicitly acknowledge any such conflict.

In any event, what makes Bell an ideal candidate if and when Marvel comes on board and Garfield has to go?

Well, as the voice of Spider-Man on a popular animated series, he's already kind of established the character, so the "development stage" of the creative process would be reduced. Finding a way that integrates his existing take on Spidey with what the Marvel movies are doing and what Sony hopes to do would be key to defininig Bell's live-action Spider-Man, but that's still easier than building a character from the ground up...and given the popularity of Ultimate Spider-Man, we also know that his take "works."

Even more pragmatically, the scenes where he's wearing the mask and talking? We already KNOW that will sync up with audience expectations.

He's also been with Disney for a long time.

Even before he was Spider-Man, Drake Bell started his career on the ABC/Disney sitcom Home Improvement and has later worked with Disney on side projects, including the ABC reality show Splash. He's also worked with Sony previously on the MGM production Yours, Mine and Ours, also early in his career. If Disney wants to put their stamp on the character, but find somebody Sony can feel comfortable with, his past work with both might give a decent middle ground.

He's also -- we're assuming here, just because of his choice of work, including an upcoming, direct-to-DVD film from Lionsgate in which he stars opposite Jon Lovitz -- a fairly inexpensive "get." Locking down an actor for a multi-picture deal in this day and age means convincing them that they aren't going to get a better deal in the course of the five or ten years it could take to finally get out from under that contract, and a guy who has done primarily cable TV is likely at the lower end of the salary scale, compared to most of the "name" actors that get brought in for a role as big as Spider-Man. Trying to establish a Spidey that the fans can immediately feel comfortable with is key, especially coming so soon on the heels of Garfield's popular take, but Bell could not only do it, he's probably one of the few who could do it without breaking the bank.

Why Drake Bell Should Be The Live-Action Spider-Man