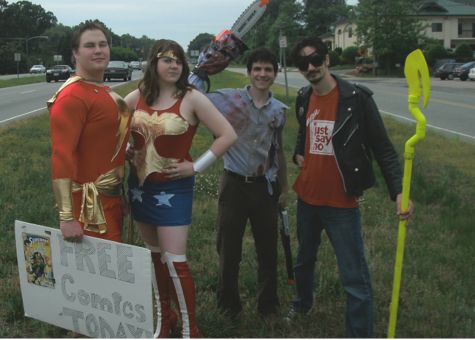 Although Free Comic Book Day 2009 events were being held all over the nation on Saturday, May 2nd, it’s safe to say that no two looked the same. Some had signings with local or national artists, some had costumed heroes making appearances, and some had sales going on at the store location.

One store had a combination of all three to get readers out to its event. Ultimate Comics, which has three locations in the Durham-Chapel Hill area of North Carolina, kicked off the event with crowd-drawing sales at each of its three locations, and the free comics were certainly a major part of the day! Customers such as Allen Spector were drawn in by the artwork “As a graphic designer, I always like to see what’s new and what’s out there,” he said. Jose Maturino said that the sales helped to draw him in, but also, “every year I always get some back issues and toys for my kid, but this year I wanted to really look for some Wolverine and X-Men also.” Wolverine in this case referring to the Free Comic Book Day Wolverine Origin, no coincidence given the release of X-Men Origins: Wolverine the day before. 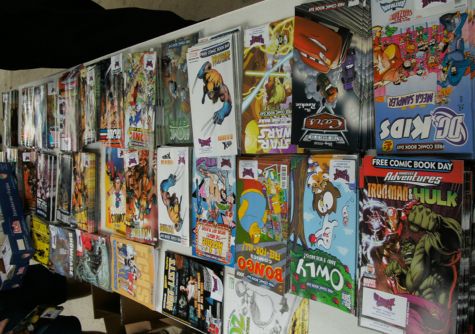 Several parents at all three locations were pleased with the opportunity comics afforded their children in their learning to read. John Goldstein commented that he and his son read comics every day, “We love coming to the store, and we are hoping to find some comics for him to read and something new for myself as well.” Free Comic Book Day as a concept also met with praise from Goldstein, “It’s a great way to expose people to the art and the medium and to show people some things they may or may not be reading currently. George Roberts shared similar sentiments, “I’m hoping this event will help expose my daughter to comics the same way I was as a kid. I think Free Comic Book Day is great for that.”

Free Comic Book Day also brings in lots of hoopla, fun and publicity for the stores, and long-time Ultimate Comics customer Jeremy Tarney and friends Laura Dewitt, Jared Hoffstedder and Jonathan Mears were happy to oblige, dressing as characters spanning the comic book universe and standing by the road to attract customers to the store’s Chapel Hill location. For Tarney, Free Comic Book Day is a way to help support the store he has been loyal to for years, “When Ultimate Comics first opened, I was excited that we had a comic book store in the area. I still come back from college for Free Comic Book Day and I get paid in comics and get to wear spandex, so it’s a pretty good day!”

For everyone involved, the shop workers, the customers, the kids and the volunteers, Free Comic Book Day is an all-day event, but is also a way to promote and maintain the medium that so many people discovered themselves as kids, whether as a method for learning to read or just as a fun escape. It’s safe to say that next year’s Free Comic Book Day will be just as successful given the high attendance and mix of old and new customers.