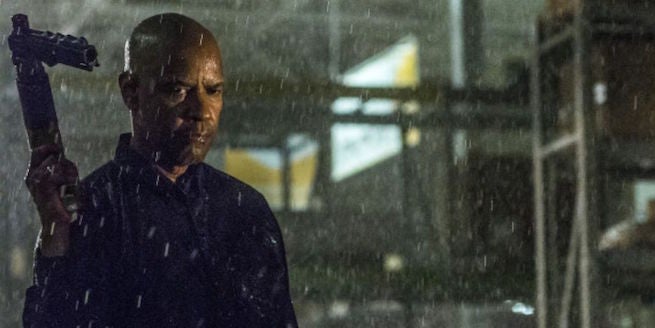 Recently I had an opportunity to catch The Equalizer. Based on the 1985 CBS series of the same name, the film is directed by Antoine Fuqua and stars Denzel Washington.

Robert McCall (Washington), a man of mysterious origin who believes he has put the past behind him, dedicates himself to creating a quiet new life. However, when he meets Teri, a teenager who has been manhandled by violent Russian mobsters, he simply cannot walk away. With his set of formidable skills, McCall comes out of self-imposed retirement and emerges as an avenging angel, ready to take down anyone who brutalizes the helpless.

If you haven't seen the film, I highly recommend it. Earning $191 million at the box office, a sequel seems almost certain.

1) I want to be Denzel Washington when I grow up. It's Denzel. There should be no other reason.

2) Why can't most people get this right with The Punisher?

The Punisher and The Equalizer have similar premises. Haunted by the loss of loved ones, two mysterious vigilantes arise on a crusade to eliminate the criminal element and become champions to the helpless and downtrodden.

The Equalizer could've easily been adapted a comic book. In addition to The Punisher, the film has a premise (albeit darker and grittier) that is similar to Human Target.

Fuqua almost makes the storytelling seem easy. The 2004 Punisher film, while a noble effort, struggled at times to find its footing with the narrative. The less said about The Punisher: War Zone, the better.

As a story, The Punisher faces a couple of major dilemmas that has plagued it both in the comics and adaptations.

But in a world of mutants, sorcerers, and super soldiers, "realism" takes on a different reality. Although Castle is an accomplished martial artist and master strategist in the comics, there's nothing that distinguishes him from any other cop or military vet on a vigilante streak. In too many depictions Castle is on a suicide mission against organized crime which he often just barely survives. Those skills that should establish Castle as a formidable Marvel Knight are often lost in the name of realism.

Alone and preparing to do battle against an army of former KGB operatives, McCall is established in the narrative as a formidable threat and the confrontation regardless of outcome is going to be an epic showdown. Even when things are dicy, McCall is still in control of the situation. As the audience we see the superior martial arts skills and strategic maneuvering from McCall, or Human Target's Christopher Chance, that we often don't see from Castle.

The other issue goes back to the basic fundamental of storytelling: character. Castle is often portrayed as an unsympathetic monster, even by anti-hero standards.

By no means is Castle the only anti-hero to use the same ruthless tactics that his enemies employ. However sadism often seems to be Castle's primary motivator and he's often portrayed as a bigger monster than the criminal element he's hunting.

Given that the film's climactic battle takes place in a Home Depot, needless to say McCall gets "very creative" in eliminating his enemies. McCall employs the same tactics as Castle but the difference is motive.

McCall's campaign in the film began because of the violent abuse a teenage sex worker suffered at the hands of the mobsters. McCall understands that evil thrives when people with the ability to act, choose not to do so. The same can be said for Wolverine, Spawn, Daredevil, Midnighter and others. They may be bad men who do bad things, but they generally do them for the right reasons.

None of this is to say that an excellent Punisher adaptation can't happen. In fact, last year's anime film, Avengers Confidential: Black Widow & Punisher did Castle much justice and it's another movie I highly recommend.

Avengers Confidential and The Equalizer should be kept in mind whenever another Punisher project is being considered.

Why The Equalizer Is The Film The Punisher Should Have Been