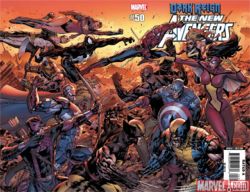 By now, it's not news that the big winner from the Secret Invasion storyline is madman/political mogul Norman Obsorn, infamous for his activity as the Green Goblin. With SHIELD dismantled and HAMMER now in its place, Norman's poised to make a large footprint on the Marvel universe. With a good portion of his story being told in Thunderbolts, other Marvel titles are touching on aspects of Norman and his team of Avengers. All the more reason why you have to read the most recent issue of New Avengers, issue 50.

This special, expanded issue gives readers one of the first full looks at the heroes' reaction to the upside-down world they now find themselves in, a world without Iron Man at the helm. The issue opens with believably paced dialogue as the New Avengers watch Osborne's Avengers introduce themselves to the world on national television. Ms. Marvel's reactions to seeing Moonstone wearing her earlier costume is quite interesting, and it's also great to see Mockingbird, back from the dead, adjusting to a world that bears little resemblance to the one she left so many years ago.

The tension that exists in this issue, mostly from Clint Barton (Ronin), over the positions both groups of Avengers find themselves in makes it work. An intricate plan to try and expose this new group follows, with Spider-Woman agreeing to present herself as a woman for hire to Osborn, all in the hopes of drawing the New Avengers into a battle, out of public view, with Osborn's crew. All of this in an attempt to shut down what they see as a mad operation for good.

Obviously Norman is no slouch. Suspecting a trap he sends the Hood and his crew of villains into battle against Spider-Woman and her teammates. What follows are some amazing action scenes, drawn by several guests artists such as Bryan Hitch, Mark Morales and Leinel Yu among many talented others. The battle scenes also allow the reader to hear the various expressions of bloodlust (Wolverine), excitement (Mockingbird) and doubt (Luke Cage) offered up by the heroes involved in the battle. In typical Osborn fashion, he observes the fray from a safe distance, smartly acknowledging the foolishness involved in beating up on Captain America, for now at least.

Not content to let Osborn run around with Bullseye wearing his old Hawkeye costume, Clint Barton decides to pull an interesting stunt by going on a TV news program to decry the new, government sponsored team of operatives cobbled together under Osborn's scope of control. It's a bold move, and one that will be interesting to track as the antagonism between these two teams continues to grow.

It's an issue that while it doesn't focus too much on the perspective of, lets be honest, the Thunderbolts, it does add an honest and fresh response to this bizarre situation the world has now found itself in. It also allows the reader to begin to see if this team can really work well together. Remember, not too long ago Ms. Marvel had been on the hunt for these same Avengers, and Mockingbird was dead.

Even if you're not reading Thunderbolts, which you should be, by the way, New Avengers will be the big book to watch as Dark Reign continues its unfolding. With a very new team dynamic, and with former Avengers Ares and the Sentry working for Norman, this book has the most potential to deliver an effective counter-point to the events of Thunderbolts and other major titles that will obviously tie in to what's happening. Most of us expect that the entire operation that Osborn and his operatives are building will collapse in on itself, and when it does, chances are that you'll have gotten the most information and detail from New Avengers.

Why You Should be Reading New Avengers