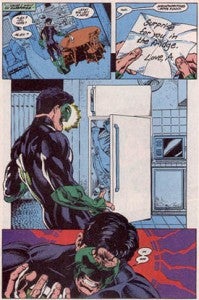 An offhand comment made by Gail Simone on Twitter has us wondering: is it possible that her firing off the Batgirl title could have been the result of a disagreement with editorial over the decision to kill a female character in order to pump up Batman in the currently-ongoing crossover story Death of the Family?

A little background: one of Simone's most famous (or infamous, depending upon your view) early accomplishments was establishing the website Women in Refrigerators, which examined the way Simone felt female supporting cast members and even superheroines were often offered up as sacrifices in order to motivate the men in their lives or make them seem more impressive.

Simone wrote at the time, "An important point: This isn't about assessing blame about an individual story or the treatment of an individual character and it's certainly not about personal attacks on the creators who kindly shared their thoughts on this phenomenon. It's about the trend, its meaning and relevance, if any. Plus, it's just fun to talk about refrigerators with dead people in them. I don't know why."

So it wasn't all that surprising when fellow comics writer Mike Nelson, responding to news of Simone's firing, asked her jokingly, "Did you not put enough women in refrigerators or something?". What was a little odder, perhaps, was Simone's cryptic response: "Funny you should say that."

A few options have been offered by fans on social media and message boards for the comment, including that DC kicked her off Batgirl to shunt her over to Kyle Rayner's comic, Green Lantern: New Guardians. Rayner (pictured above) is the character whose girlfriend was literally killed and stuffed in a refrigerator, thus naming the trope Simone is critical of. Neither of those is particularly likely.

What's more likely, it seems, is that Simone was asked or instructed to kill a female character in order to give some "punch" to the Death of the Family event and found the death to be shallow and meaningless, contributing to the problem she's long been critical of.

There are three candidates we can think of...

Barbara's roommate in Gotham City, Alysia is just begging to be cannon fodder on Gail's way out the door.

Supporting characters, outside of the small handful of them that go back fifty-odd years and define the way the public sees the character (read: Lois Lane), are pretty much treated as interchangeable these days, and often when one writer puts a lot of blood, sweat and tears into developing a cast that the fans can appreciate, it's only a matter of time before the next person comes along and stomps all over it.

There's been some speculation that James Gordon, Jr. might be the killer. Certainly, we see him looking pretty rage-y in the solicitation for Batgirl #17, which takes place immediately after Death of the Family. Then again, that could be a result of another potential victim... 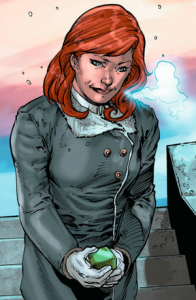 We speculated at one point that Jim Gordon could be the Joker's big "victim" in this storyline, since Barbara is still grappling with the impact of the story the month after, according to solicitations. Also, Gordon's son shows up and he's NOT happy, and apparently feels he has something he needs to take out on Batgirl. We thought, that seems like a recipe for disaster if Gordon were killed and the Bat-Family were all there but didn't do anything about it.

Then again, ol' Jim knows what he signed up for. And since the Joker already made one big play for Gordon and failed, it seems unlikely the Clown Prince of Crime will try the same trick again. That doesn't necessarily mean he won't try to emotionally cripple Barbara by taking away her other parent. And the rest of the logic still stands from our earlier prediction.

The big reason this one's unlikely? The Joker killed Jim Gordon's wife (Sarah Essen) as the Big Culminating Moment of the No Man's Land storyline, something that's still widely available in print because of its connection to The Dark Knight Rises. It seems like killing off BKG would be a suspiciously similar plot device. 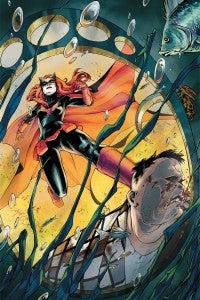 This one's a long shot, since she's currently starring in her own title, which has received rave reviews and won the company a GLAAD Award. Still, there's reason for concern among Kate's fans.

The Batman solicitations haven't been released yet, even though almost all of the other solicitation groups have been previewed (also missing: The Dark). It's possible there's something in the solicitations that DC wants to be able to announce before they go live and while it's likely the name of who's replacing Simone on Batgirl, there's always the chance we'll find out that there's a "final issue" buried in there for Kate.

Also, we heard through the grapevine at San Diego Comic-Con International this year that J.H. Williams III's work on Batwoman was winding down since he has to begin work on The Sandman with Neil Gaiman. In the same way that many wonder how Batgirl will fare without Simone, it's hard to say how Batwoman would do without Williams, especially since she doesn't enjoy the same notoriety outside of the hardcore fandom that Batgirl does, having appeared in movies and on TV.

Will A Major Female Character Die in "Death of the Family"?