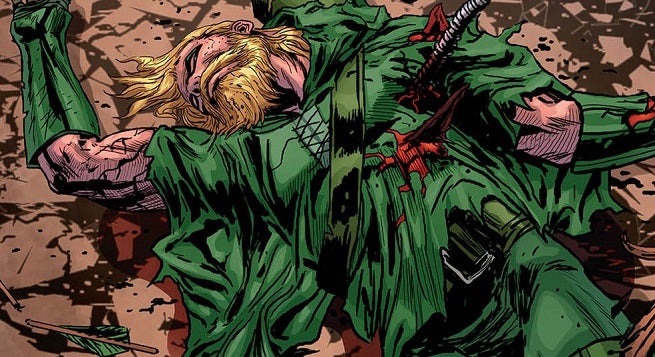 It was fundamentally "change the series," according to executive producer Marc Guggenheim, who also told us, "It's definitely a game-changer kind of episode. I think everyone at the end of ["The Climb"] is just going to be going 'What the f--k?' I think the other thing they're going to be going is, 'Did they just really do that?'"

So, what could lend itself to that sort of reaction?

What if they kill Oliver Queen?

Okay, so...probably not kill, per se. But what if he's assumed to be dead by the other characters -- and maybe even by the audience -- at the end of tonight's episode?

"The Climb" centers around a duel to the death with Ra's al Ghul. From what we can piece together, the DNA evidence provided by Central City's S.T.A.R. Labs turns back genetic markers indicating that Oliver Queen is the one who murdered Sara Lance.

Quick shots in the trailer of Oliver choking Merlyn and telling Thea that he will do anything to protect her likely indicate that, in fact, it's his sister who's the killer, but that Oliver surrenders himself to the League of Assassins to prevent further scrutiny. He volunteers to duel Ra's rather than surrendering himself to death by the League.

And then...well, obviously we don't know anything beyond that. Killing either Oliver Queen or Ra's al Ghul would be a massive beat for the story to hit, and either seems unlikely.

That said? The first three episodes back from the midseason break will reportedly center heavily on Laurel's journey to becoming Black Canary, likely including a flashback covering Sara's journey. At some point, there was a period when series star Stephen Amell participated in Movember, writing to his profile that "I have a break from work and raising awareness for men's health seems like a fantastic idea."

At the time, ComicBook.com reached out to The CW to see whether there would be an episode made entirely without Oliver Queen, and were told that he would be participating in that week's episode. Whether that means his facial hair will change in that episode or just that he shot either before or after his "break from work" wasn't elaborated on.

It's perhaps also worth noting that, while the obvious answer is someone (possibly Merlyn) interrupting their duel and changing the game, Ra's did have that big, luxurious bathtub in his first on-screen appearance. We also asked Guggenheim yesterday whether the Lazarus Pit, which allows Ra's al Ghul to heal and keeps him functionally immortal in the comics (and can even raise the dead, depending on the writer), is something too far-out for Arrow or whether he thought there was a way to do it onscreen.

Besides Team Arrow there as "fill-in" main characters until Oliver could somehow be back if he were apparently killed (because nobody believes The CW is going to let go of Stephen Amell), any onscreen "death" would almost certainly generate a lot of discussion around Connor Hawke, Oliver Queen's illegitimate child who has been hinted at in the past -- most notably, on last week's episode of The Flash.

Some fans have even suspected that Oliver's genetic markers point not to himself, or to Thea, but to Connor...although it's virtually impossible to imagine how a ten- (or less) year-old boy would not only kill Sara but also look familiar enough to her to get the "what are you doing here?" reaction she gave just before her murder.